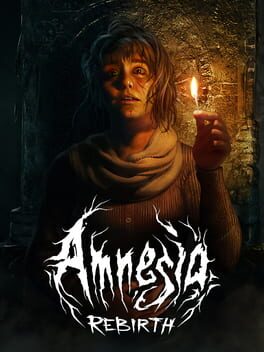 Amnesia: Rebirth is a new descent into darkness from the creators of the iconic Amnesia series. Set in the desolate landscape of the Algerian desert, the game will focus on new character Tasi Trianon as she sets out on a harrowing journey through devastation and despair, personal terror and pain, while exploring the limits of human resilience. Early in the game, Rebirth takes you through a free-roam fort occupied by a single creature that, while very scripted, haunts you as you venture from blinding desert light into dark structures around a central courtyard - almost Resident Evil like in nature. Unfortunately nothing else really lived up to this sequence for me.

Frictional’s Thomas Grip describes their ‘SSM framework’ approach to horror games as the overlap and interaction between systems, story, and the player’s ensuing mental model of these. Via removal of any ‘fun’ combat interactions, randomizing difficulty after each death, limited inventory management and prioritizing narrative, this has worked well for them so far (and unfortunately spawned clones that didn’t do the formula justice). After SOMA (which I found to be their strongest work to date) Amnesia Rebirth dwindles in repetitive monster encounters and a world always in movement, that constantly discards any sense of place or natural geography. Upon this they've layered a heavily scripted sentimental narrative that suffocates the gameplay - with Tasi’s constant comments, taking away control of the player and often placing full-screen illustrated flashbacks over your view.

I really wanted to immerse myself in the events occurring in the present, which is something SOMA succeeded at. Instead the focus was on collecting matches, hiding in monotonous caves and enduring your screen flashing shit at you as you lose your sanity, while the narrative slowly crept in, gnawing away in the background. The finale was great though, allowing you to make choices entirely through gameplay, that highlights how most games only allow for choices to be made through dialogue selection. Hopefully this will be further fleshed-out in future (though I understand the consequences this would have on budget/labour etc.). Still quite fun and sometimes really creepy, but I believe they went a little overboard with all the physical and mental pain the protagonist has to go through... Also, I preferred the gothic/steampunk setting of the previous two installments. At best the atmosphere is as great as ever, but it was let down by the writing. Overly talkative protagonist, hard to follow plot and a big cast of faceless characters just did not work. Needlessly linear as well. After the armory you can probably drop the game because it's the highpoint of the game, there's kinda only 1 type of monster stalking you most of the game, the story is really not that good or interesting as the first game, the characters you hear about in cutscenes are not interesting, the idea of the game having flashback each 3 minutes was fuckin terrible and yo why the fuck the protagonist doesn't ever shut up, it ruins the immersion with her bad dialogue during the entire game.