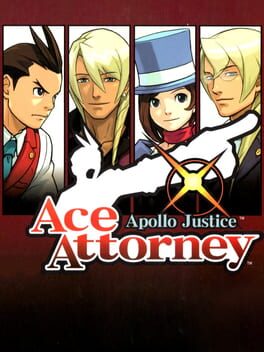 Case 1:
A pretty great opening to the game which reminds me of the first case in Trials and Tribulations. While not as great as that case, it does drop some major bomb shells and does a really good job at introducing the player to the overall mystery in the game. Why is Phoenix the defendant? Why did your supposed friendly mentor kill the victim? The way they introduce Wright as this completely different person already kicks the case into high gear.
It does a decent job at introducing Apollo but I admit that I was distracted by how good everything else was. Poor Apollo just wanted to defend someone but then he gets wrapped up in all this hi-jinx like me. Olga Orly is also one of the funniest witnesses with her breakdown being utterly hysterical (mainly the expression). I don't really know what else to say other than It's a really good first case. The perceive mechanic is also pretty neat.

Case 2:
I cringed out of my seat when Trucy, the fifteen year old magician, had "magic panties" however I like the way the bloomer thief was used; he is one of the funniest witnesses and his reason for stealing I did not expect. The way the case came together with some parts was also hilarious like how the doctor guy couldn't get his car to start working because the panty thief shoved Trucy's bloomers in the exhaust to hide them. Some of the characters here are also quite charming and cool but that is all the thoughts I have about this case to be honest. It feels like Recipe for Turnabout if it didn't have majorly stupid unbelievable plot points but if it was a little less humorous but still funny.

Case 3:
Throws up
No seriously I actually wanted to go to heaven after experiencing this case. An utter travesty that I can't for the life of me figure out what the writers of this case were on when they wrote this. Recipe for Turnabout and Big Top Turnabout may be stupid but at least they had something of enjoyment to offer. Other than Lamiroir and the breakdown being great, let me list the reasons why this case is the worst in the series...
- This case feels like the writers had some good ideas and were desperate to make it work but unfortunately fell flat.
- The prosecution's entire case ruins Klavier and Ema for me because they basically get all their braincells removed. A supposed blind 14 year old pianist is apparently capable of committing the crime despite the fact the murder weapon is something that'd dislodge his shoulder (the game even SAYS this) and he is not strong enough to carry someone like the victim (who is a big muscular man) all across from the dressing room to the stage in a short amount of time. The prosecution don't even give a motive as to why Machi went through all the trouble to kill someone only to drag the body, pass out near it and then get caught like an idiot. What's the other little thing? Oh yeah, HE IS BLIND! Well it is revealed he isn't the true blind one but the fact nobody during the trial brings up such a significant fact during the beginning and instead focus about how he is the only one who can fit through the vent had be pulling my hair out. I was screaming "APOLLO! BRING UP THE FACT HE IS BLIND! OH FINALLY! WAIT HE MISSED TWICE SO THAT MEANS THE KILLER MUST BE BLIND?!?!?! OH FUCK ME!!!", and I still feel angry thinking about it.
- The silliness doesn't just lie with the prosecution's case. The fact that LeTouse survived a gunshot for that long conveniently for Apollo to hear him give a clue is so stupid, I feel like it was done on purpose to throw the player off from the true time he was shot. The fact that LeTouse said the name of a witness but not the killer had me face palming. There is way more stupidness in this case but I will save your brain cells from vanishing.
- The overall mystery and plot here are so BORING. I actually almost fell asleep. The stuff with Lamiroir is the only exception because I was invested in her development but everything else was such a massive amount of wasted potential. The fact that the murder happened at a Klavier concert and the way the characters were introduced were great but as soon as the murder happens it's all downhill.
- The trials are already incredibly frustrating to progress due to everyone's stupidity but another infuriating thing is how you're forced to watch the same clip so many times. The funny thing is that I actually hated using the volume mixer even more because there was a certain point where I was trying to prove where Machi could have pressed some button or whatever but the controls were so confusing that I didn't even know if I encountered a glitch or not. At that point, already sick and tired of the case, I just gave up on it and watched the rest of Youtube.
Never mind Turnabout Big Top, this case is the definition of stupidness and wasted potential. This case is as bad as some of the mind numbing cases in Danganronpa and that is something I didn't want to say with an Ace Attorney chapter. Overall, fuck this case.

Case 4:
I took a break with Apollo Justice because I was just so fatigued after the game's disgusting 3rd case. This is the case I should probably experience again since I feel like I wasn't in the right mindset at the time.
From what I can say though this case is pretty good. I won't argue with people who may say this is one of the best in the series but I can say that personally I didn't find Apollo Justice's overall story to be that interesting. I soon came to the realisation that Apollo and Trucy, the protagonists of the game, felt like they were just spectators to the events unfolding.
Apollo is completely outshines by Phoenix here which kinda defeats the purpose of this game which was to introduce a new attorney to take Phoenix's place. I don't hate Apollo but I felt like for someone who has his name in the game's title, I expected him to be more involved outside of the reveal that he is technically Trucy's brother. Trucy I think is good and I like as a character more than Maya but in terms of story relevance, that all goes to Maya. Trucy is involved in the overall story majorly but when comparing her with Maya, her involvement still felt bland which is crazy since she is part of the magician family... Okay maybe bland is really harsh and I am probably just remembering things wrong - one of the reasons I need to play this case again.
Speaking of, the entire plotline with how Phoenix lost his attorney badge, the troubles with Trucy's family and Kristoph's involvement are really good but I just wasn't as interested in all this in comparison to the original games which blew me away. Bare in mind that I took a break between this game and T&T.
Kristoph was amazing in terms of personality, presence and intimidation so it felt really satisfying to learn that chad Phoenix Wright developed into being a really calculating person through all his preparation to ensure Kristoph's defeat. I really wish Kristoph though had a better motivation outside of him wanting to cheat because outside of his amazing presence, he had a generic bad guy motivation.
Klavier is my favourite character for being hysterical but even I have to admit that he didn't really feel like he was impacting anything here.
In terms of how this case was set out, I really like the defendant so you will not be surprised to see that my jaw dropped when she fell to the floor thanks to the same poison. Vera reminded me that Ace Attorney is great at making really expressive and memorable characters. The peaking into the past and future was also quite cool.
Overall, this case can be enjoyed heavily by someone if they are really invested in the overarching story set up by the first case. Unfortunately, that person wasn't me.

Overall:
I don't hate it but I don't really like it either. I guess I had a good time with it but every time I think of Ace Attorney, Apollo Justice doesn't really come to my mind. Maybe if the third case wasn't so bad I would have been pumped for the final but I was so fatigued after that, even a break wasn't even to get me invested back into the game.
I will say this though, the soundtrack in this game fucking SLAPS! I absolutely love the tracks in this game and it might be the best ost in the entire series.
Also Klavier is one of the best prosecutors don't @ me.