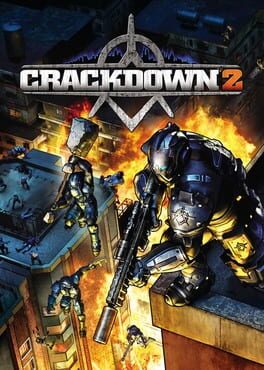 Crackdown 2 is a sandbox-style third-person shooter video game developed by Ruffian Games and published by Microsoft Game Studios. It was released on Xbox 360 in July 2010 and is a direct sequel to the 2007 video game Crackdown. The game is modeled similarly to its predecessor Crackdown, a third-person shooter in open world game play. The player character is an advanced super-powered officer for the city-funded "Agency", known simply as the "Agent". This time around, players choose one of four faces and armor colours (eight colours if you preordered it), instead of just the preset heads offered before. Along with that, the orbs have been carried on from the first game, and the Agent's powers are expanded and enhanced such as the Agility Skill which now allows the Agent to jump higher than in Crackdown, glide, and gain access to the helicopter landing pad at the Agency Tower. Driving is also available in Crackdown 2. You’re able to commandeer any number of vehicles in the game, including Agency vehicles, Peacekeeper Cruisers and a large number of civilian vehicles that the Cell have armor plated. Checkpoint races are back, both Road and Rooftop versions. Like Crackdown, the game will allow for on-line co-operative play in the main game, but will now support up to four players. The game will also feature competitive multiplayer modes for up to sixteen players. While the original Crackdown supported System Link playing for co-op, Crackdown 2 won't be featuring the same option.