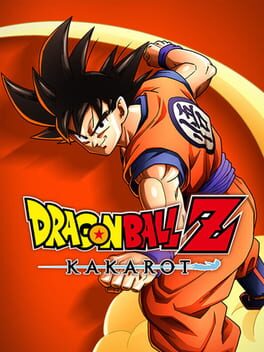 Relive the story of Goku in DRAGON BALL Z: KAKAROT! Beyond the epic battles, experience life in the DRAGON BALL Z world as you fight, fish, eat, and train with Goku. Explore the new areas and adventures as you advance through the story and form powerful bonds with other heroes from the DRAGON BALL Z universe. Not a bad way to play your way through the story of DBZ.

I'll start by saying that this high rating is purely because I am a massive Dragon Ball fan, so I enjoyed the game far more than I would have if I wasn't. It's also given with the hope that the many bugs that plague the game are patched out, since it's still only 1 week since release. I don't feel like it's an unfair reason to rate the game highly though since regardless of the bias reasons, I DID get a ton of enjoyment out of the game, and that's what they're for.

Anyway... The presentation of the game I found really neat. It comes out as if it's a real "playable anime", with each arc of DBZ getting it's own little preview and title card. The feeling of truly playing the show is made more apparent by just how much detail goes into the cutscenes. While it obviously doesn't fit in all 291 episodes, this game goes out of its way to tell the full story of Dragon Ball Z, rather than just using the basic footnotes as most other games do in order to get you from fight A to fight B. This can be a bit of a pain in some times though, as you go through 20+ minutes of cutscene and dialogue in a run, which happened mostly in the Boo saga. Cutscenes themself vary in quality, some of them, like Vegetto vs Boo, had outstanding animation and action, while others felt stiff.

The controls definitely feel unconventional at first, but after getting used to them, flying around the map feels as natural and fun as ever. I do like how easy they make it to traverse the world, since slow and tedious journeys in open world games can often be a problem for me.

Subquests provide a ton of fun. Some of them are funny, some help fill in plot holes or missing story sections and some of them actually develop characters (Chaozu's sidequest in this game provided more character than he's ever had in the series). Some of them even have recurring game-only characters, like the cook who keeps getting attacked or the tourists. Unfortunately the majority of quests are just "Fight these robots" or "Gather these things", with a handful implementing the mini-games of driving, baseball and fishing. One other problem with these was the lack of enemy variety, as they used the same basic pirate robot enemy every single time, just with a new coat of paint in some cases. There's even one mission where Pilaf threatens you with his new machine, and I was expecting to fight the Pilaf Machine from Dragon Ball, but nope, just more pirate robots. A huge wasted opportunity.

The combat isn't at all deep or combo-oriented, but it's just so fast paced and is more focused on timing and rapid actions that I found it really enjoyable. The fact that there's so few playable characters actually allowed them to go all out and make villains feel like real boss fights, with moves that would be game-breaking under the players control, while in most DB games the enemies are restricted to the human-controlled movesets.

While there isn't a whole ton of amount to do relative to some bigger open-world RPGs, there is a constant sense of progression after finishing each saga as more options are added to the intermissions, which serve as the times you essentially get free-roam of the world.

One thing I absolutely loved was the community board. I spent hours and hours mix and matching the icons of characters to try and find the best results. I hope every franchise-based game gets something like this. It's surprisingly addicting and unlocking a new emblem was far more exciting than it should be.

The game has an "instant victory" mechanic where if you're way above the level of an enemy while dashing into them in the overworld, you just win the fight and get the exp and rewards. I thought it was a great way to prevent monotonous fighting while still letting you get the rewards. A nice bonus for those who go out of their way to get as much exp as possible.

Post game has some great content for you too, with a huge chunk of side missions and a secret boss.

I finished everything in the game, including filling out the Z-encyclopedia, getting all community boards to max and the emblems to max friendship, and in all that time I never got bored. The only time I even felt overly frustrated with the game was the crappy controls for the robo-walker time trials (which luckily are fully optional).