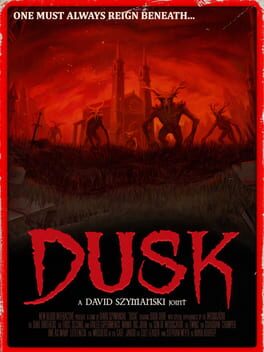 Battle through an onslaught of mystical backwater cultists, possessed militants and even darker forces as you attempt to discover just what lurks beneath the earth in this retro FPS inspired by all your 90's favorites. Featuring a full single player campaign, endless survival mode and classic arena multiplayer. Just Quake I guess. Wild stuff they do in the later levels. A love letter to the classic shooters of Old. Blending together elements of Quake and Blood mostly, with a good dash of Doom and Heretic.

I am by no means a boomer shooter fan. I like them, but wouldn't really consider them anymore than shooting galleries with great gameplay. I did enjoy playing DUSK but I'm not gonna go out of my way to jerk it off as one of the most incredible experiences ever. It's a celebration of classic FPS philosophy and it does that job well: Good weapons designed as tools to help you take on a varied cast of baddies that all have different levels of importance, all within cool designed levels and great music to get you in the mood.
I'd talk about the story of the game but I honestly couldn't remember, and it wasn't much of a focus to begin with.

One of the feature's I really loved was the customisation of the colour palette of the game. As such I went and made my game look garishly pink cause I'm cool and quirky like that (nya). The visuals and aesthetic of the game itself is really cool. The low poly look in combination with some great sinister lighting gave the game very strong horror undertones. I however found the level design to be a mixed bag.

The levels visually were interesting but the design and gameplay side of it was a mess. There were plenty of moments where I felt it was too claustrophobic and restrictive, giving me very little wiggle room to circlestrafe at high speeds, and the game shines when you are given open areas to do just that. On the other hand the claustrophobic areas make so much sense especially for one of the enemies I will get to shortly. I often couldn't see anything in front of me because the lighting was non existent, making areas dark. And in combination with the really tight level design in certain areas and I was frustrated when I was lost. While I don't think was intended, these flaws in design led to some cool gameplay moments: bits where I had no flashlight for a certain period so I used the light my pistol made to see where I was going.

The weapon roster is kinda bland. In gameplay they feel great but looks wise they all feel uninspired. One of the fun things that Classic shooters did was put a spin on all their weapons both in gameplay and aesthetics, giving them iconography; like Duke Nukem's shrink ray, or the BFG in DOOM, or the napalm launcher in Blood. In DUSK however they all just feel uninspired. What doesn't help is the lack of a power weapon the game has. There's no BFG equivalent in DUSK which is a real shame. Aside from that gripe they all work fine and all serve their purposes: pistol as a starter gun, shotgun for consistent damage, etc etc etc. The one unique weapon that DUSK can claim as its own is it's crossbow, which has the ability to pierce through multiple enemies, but even then it's just...eh.

The enemy roster is all fine too. None of them are very memorable, not even the bosses, say for one certain enemy: the wendigo. This enemy is what makes the claustrophobic level design work. The gimmick of this enemy is you can't see them until you shoot them, thus playing a unsettling sound queue and revealing themselves. The game make's good use of Wendigos too, giving the game's horror undertones even more impact.

In terms of length the game felt fine. I played it in small sessions along with other games to spice things up, but I was able to blitz through the rest of the game in one sitting before I wrote this review. While I did get stuck a fair few times and died a lot because I was playing on the game's second hardest difficulty, it wasn't too bad.

That's all I really have to say. DUSK sets out to be a faithful recreation of classic FPS, and I think sits comfortably among them, as well as being the first in a new wave of classic FPS games. If you like boomer shooters, definitely pick this one up. A grab-bag of FPS design from across the decades, tastefully arranged in a bombastic, unpredictable three-episode odyssey. An instant favorite. It’s everything you could possibly want in a 90s throw back, minus the 2D sprites and plus the HD resolution, mouse aiming, creative level design, uniquely simple but somehow freighting enemies, frantic play and addictive gameplay. On some levels I would even try to see how many enemies I could get fighting each other, something I did all the time with Doom. And yes, they do fight and kill each other. It's glorious.

Dusk gives off the impression that most old-school tribute games do: "I love this thing so much that I'm going to make it again." I mean, look at it -- it's not unwarranted.

You can rest easy, though, knowing that amidst the strafe-jumping through viscera at 60mph, Dusk is a virtuosic exploration of the old-school FPS that still manages to sneak some innovation in between the lean musculature of its level design. Hope you like your keys primary-colored!