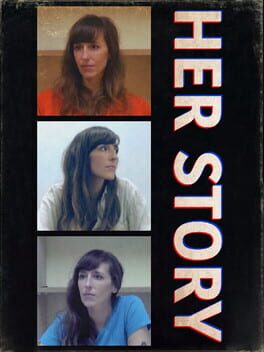 Her Story is the new video game from Sam Barlow, creator of Silent Hill: Shattered Memories and Aisle. A crime fiction game with non-linear storytelling, Her Story revolves around a police database full of live action video footage. It stars Viva Seifert, actress and one half of the band Joe Gideon and the Shark.

this game is one of the few that encourages actual attention from the player, you wont be having the answers handed to you through dialogue options like any other detective game which makes this title perfectly executed
either way, mid

An interesting experiment in non linear storytelling that is a neat curiosity, though not much more. The way the real crimes story unfolds as you work out keywords to search for is really cool, really makes it feel like you're figuring it out yourself. That said, as I got later into the game I started hitting walls and getting frustrated rewatching older clips repeatedly trying to suss out relevant threads. It's cool that they tried this, but I'm not sure stories should be frustrating to unfold.

Cool idea for a game, pulled off about as well as I can imagine- you’re reinvestigating a years-old murder by studying some long-forgotten witness testimony tapes, but the catch is you can only view them by plugging in the right keyword based on what you’ve watched so far. Maybe you watch a video that mentions a new name, or location, well you can check that and see what other information is available; there’s hundreds of clips, so it’s satisfying investigating and unlocking more and more clips. Personally I pulled out my notepad app and had a stack of topics that grew to 40 or 50 long as I tried to put the whole story together. What’s even more impressive is that even though all of the clips in the game could conceivably be viewed in near-infinite different number of orders, Her Story still manages to weave a plot together, with twists and a strong sense of pacing. Cool stuff! I’ve heard nothing but bad things about follow-up Telling Lies, so I guess I’ll skip it.

Her Story is obviously a game about detective work in specific, but more broadly it reads to me as being about research. Between piecing things together, chasing down and eliminating dead ends, and making note of every errant details, the game is able to make database trawling into a surprisingly thrilling affair, through its simulation of the work of uncovering the needle of truth buried twenty years ago in a haystack located in a police barn that subsequently flooded. This game understands that the hardest part of finding the truth is sorting through the detritus of data that exists at its periphery, and through that understanding was able to impart sublime moments; I straight up cheered when I discovered the name of a character I began wondering about a few dozen clips prior. Still, some pacing issues afflict proceedings, perhaps inevitable with such a freeform structure. By my count the game has two major reveals, and I had found both by the time I had seen 50% of the database. By the time I hit 75%, I felt I had sufficient context for the reveals, and trying to push onward to 100% was exhausting, having run out of leads and having already found numerous eight second long clips featuring only a single clip. I gave up, and while I still find that frustrating as a whole, I’ll admit that there’s a fitting aspect to it; at the end of the day, there’s only so much certainty the truth can ever have and eventually you’ll have to go home hoping that you've at least uncovered enough.