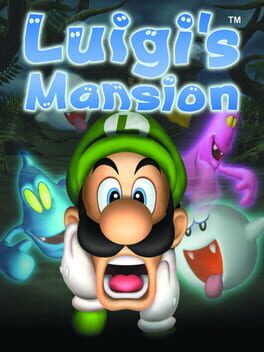 Luigi steps out from the shadow of his brother Mario and into the gloomy shadows of a very haunted house in this, his first-ever starring role. When Luigi learns that he's the proud new owner of a creepy old mansion, he's thrilled. Of course, his feelings immediately shift when his brother, the storied Mario, disappears from the house. Now, you'll have to help Luigi track his brother down, making your way through expansive 3D levels. Each stage is packed with ghosts and ghouls to put you on edge; and you'll be armed with a flashlight and a vacuum cleaner to help you capture your foes. Armed with a flashlight and a customized vacuum cleaner, Luigi must rid the mansion of Boos and ghouls -- and find his missing brother to boot!

The best spooky game. Just wish it was longer.

ridiculously based and fuck the sequels

The first good Ghostbuster's game at the time, and it still is. It oozes charm left and right and is also really unique and new for Nintendo at the time. Still holds up as their best attempt at it to me. Luigi's Mansion 3 was a step in the right direction though.

Story is pretty funny, Luigi checks his spam folder and sees he won a mansion. Come to find out later, that it's haunted. He then becomes the unnamed fifth ghostbuster and cleans up the mansion one room at a time.

Gameplay here is so much fun. You catch a whole variety of ghosts while exploring a large mansion filled with unique rooms. While some rooms are pretty typical for the setting, a lot of rooms have crazy puzzles and gimmicks to them that really stick with you as you go through them. The game's difficulty is never insane, but it'll definitely test your abilities from time to time. The most satisfying thing to me though is finding the millions of dollars worth of money in the mansion. You'll find money just about everywhere, and it's really fun to see it pop out of places you wouldn't expect. Collecting it is also fun as each currency has it's own sound effects for discovering it and collecting it.

The music is literally the same song the entire time. Rest assured there are other themes here for you to enjoy, but you'll be hearing the same tune most of the game. And it's because it's a really good song that has different variations for it that keep it from getting annoying which impressed me a lot. The other songs in the game are a joy to listen to as well, capturing the vibe very well.

Sound effects are great. I already gave an example above, but this game has some good detail. There's no sound effect out of place here and sound good, some being pretty satisfying like when you capture a ghost, they make a "pop" before being captured. The only sound effect I can complain about is for explosions because it's particularly loud, but it's not a major issue.

If you're looking for a fun horror game that's not really that scary but has the vibe of one, go for this game. It's got a lot going for it, and it's short, so you can easily blast through this in a day, and I feel like that plays to its strengths a lot. If it were to go on any longer, it'd get boring, so a great length. You can get it on Gamecube, and it got re-released on 3DS with some new stuff that makes it worth it I'd say, but I'd personally recommend Gamecube.

Such a cool game! As a GameCube launch title, it perfectly encapsulates how weird and different this console was, and the many interesting new ideas that’d be formed from this era of Nintendo! And it’s still super fun today!