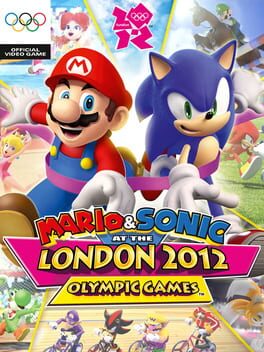 Mario & Sonic at the London 2012 Olympic Games is a collection of numerous events based on the Olympic Games. Mario & Sonic brings together the two titular characters and eighteen more from both franchises to participate in environments based on the official venues of the 2012 Summer Olympics in London. The characters are divided into four categories: all-around, speed, power, and skill. Slightly better than the original but not by much. Minigames overall are a little less consistent in quality but I was a huge fan of the London City story mode which really carried my experience

A fun game with a lot of replay-ability. There is many events to play, with some of the events being very simple and easy to pick up, and others are a bit more complex and more competitive, however people of all age and skill levels can play. Some of the games are free for all, some are player vs player, and some are team vs team. There's a good mix of co-op events and competitive events to play through. My personal favorite games were Football, Rhythmic Ribbon, Synchronized Swimming, Badminton, Beach Volleyball, Table Tennis, Cycling, Dream Rafting, Dream Discus, Dream Sprint, and also Fencing and Dream Fencing

There is another mode, called party mode. In this mode the goal is to complete task, mini-games and also regular events and earn stickers to fill out your board. You start off in a world where you can move around, and the goal is to look for npcs so that you can activate the mini-games. The person who does the best during these mini-games will earn the most stickers, and the person who sucks the most doesn't get any. The mini-games are very reminiscent of the ones in Mario Party, and honestly I found some of the games funner than the regular events and also funner than the mini-games in the Mario party series. After a few mini-games, a player gets to choose an event for everyone to play through. The events give the most amount of stickers so the games tend to be more competitive. After the event the day starts over and you go off to search for more mini-games again until the next event. This goes on and on until someone finishes their sticker board. Its a very simple concept but there's a lot of replay-ability and fun to be had in this mode.

There's also outfits that you can unlock for your miis to customize them. They have different appearances and also give different stats.

Overall I gave this game 5 stars because of my memories of it. I had a LOT of fun playing this game when I was younger solo and also with friends. For solo players, you can find some enjoyment completing the sticker book, doing achievements, unlocking the best outfits and using them to get the best scores possible for events, and occasionally just playing against the CPU, however this game is at its best with at least one other player.

Why haven't we nuked London yet?

london party's okay, there's some standout minigames here are there but nothing special. still runs into the same issue as 2008 where most minigames are just 'shake to win'