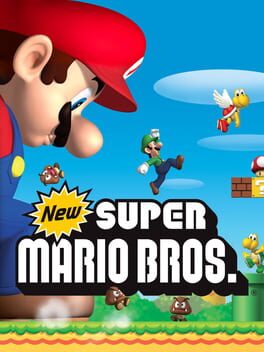 New Super Mario Bros. is a side-scrolling 2.5D action-adventure platformer game for the Nintendo DS, starring Mario and Luigi. The game features a solo story mode with Mario or Luigi, a two-player wireless game Mario Vs. Luigi, as well as a minigame mode for up to four players. The gameplay of New Super Mario Bros. is very much like that of the classic 2D platformers, mostly Super Mario Bros. and Super Mario Bros. 3, and substantially builds upon them to create gameplay both classic and contemporary. As the game is on DS, the touch screen allows players to store an additional power-up and view the distance still to go in a level. Though this series eventually got really old, this one still holds up really well.

I really liked a lot of stage gimmicks unique to this game and also the blue shell powerup. Not bad at all, it felt a little floaty, but nothing game ruining. It's a cute, little game. Has the most soul in the NEW series both because it's the first, but also because it's on the DS, it had to work with limitations, and it has a bunch of wacky effects which never came back, such as droopy mushrooms and inflatable boo. It was pretty basic, though, and a little unresponsive, perhaps due to emulator. This game has a new powerup which it is willing to not have entire levels dedicated to: the blue shell. It's barely an upgrade, because it's hard to use, but perhaps there's a skill ceiling with it, like the rail mail in Shovel Knight: Specter of Torment. I want to praise how brief and somewhat understated the game is, but I also want to question how necessary it was to be constantly just behind Bowser Jr, and having to stop playing to watch him walk forward and jump into the next castle. Is this a game with urgency? Anyway, it's fine.