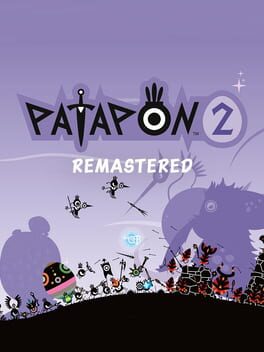 Patapon 2 sees the return of the beloved and innovative, rhythm-based 2D action game remastered in 1080p and dynamic 4K* resolution. In Patapon 2, a follow-up to the original that received critical acclaim, players are tasked with leading the colorful Patapons, a brave and noble tribe now in an unfamiliar land, through a series of epic battles against the opposing army and gigantic monsters. In a distinct gameplay twist, action and rhythm are intertwined as players utilize drumbeats to march, attack, and defend, ultimately leading the Patapon tribe to victory.

The original game is one of my all-time favourites, and this remaster was wonderful and did a lot of things very well. First of all, playing this on the ps4 feels really good. It was always a bit inconvenient to play it on the PSP in my opinion, as it ran out of batteries quickly, and had a very small screen. But I played this game for bloody hours on the trashy PSP that we had with duct tape holding the battery in place as the battery hatch had been lost. But on the PS4, this game simply looks incredible. The artstyle really gets a boost from being that upscaled. Wonderful stuff! I played it like crazy for many days in a row, and was seriously addicted for a while. So I decided to 100% it, because I had never done that in Patapon 2 before. It was quite a journey, although it made me very aware of one of this version's biggest flaws: the fact that it is on the ps4 means that there is a bit of input lag from the controls, which makes playing this game a lot harder timing-wise. It isn't a big problem though, and some of the challenge was welcome, but you felt a bit cheated by the fact that you couldn't really do the inputs that you wanted to at all times. I would often intentionally get out of Hero Mode back in the day to protect my hero from harm sometimes, but Hero Mode became way too unpredictable to reliably be able to do that this time. Overall though, this is a great way to experience one of my favourite games of all time! About as good as I remembered it, but the amount of grind required to get good patapons at decent levels can be brutal