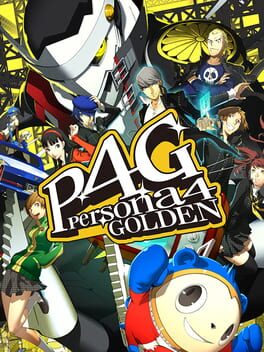 I gotta say, this game is great!
The game is about a group of teenagers solving a serial murder mystery in a Japanese small town. In doing so, they enter a place called the TV World, and fight shadows and face their shadows as they confront what they don't want to admit about themselves. The story is really solid, and while I prefer the much, much darker tone of 3, the light hearted tone of 4 works really well. The characters are also very entertaining to watch.
The gameplay is very similar to 3, and that's not a bad thing. The combat is still satisfying, and while I'm not the biggest fan of strike, slash, and pierce being combined into one element, I AM a big fan of how they made you able to control party members, which was a very glaring flaw of the PS2 versions of 3. However, the difficulty was too easy, and on hard it was just grindy, not hard. Still, the combat was satisfying. Additionally, doing social links has more purpose now, as you can now gain abilities for party members from them.
The presentation is acceptable. Sadly, a few visual effects of the PS2 version didn't make it into Golden, such as the TV static during battles, and the PC version just makes the blocky models stick out more, however for a PS2 game it looks quite good. The boss models and personas also have quite a lot of detail in them.
The music is great. There's a lot of J-Pop, and while I'm not the biggest fan of pop music in general if it isn't made by Michael Jackson, it's still some good stuff. The boss themes, though, are absolutely fantastic, as I'm a sucker for rock music. Some great songs include The Almighty and The Fog/Mist. However, I will admit I prefer the OST of 3, and there is a distinct lack of Lotus Juice in 4.
So overall, I would recomend Persona 4 to anyone who wants to get into JRPGs. While I prefer 3 overall, the easier difficulty of 4 and more lighthearted tone makes it a great entry point, and just great game in general.
8.75/10

Suffers from a lot of the same issues as persona 3 and 5 story-wise, but social links are still fun and the gameplay(on hard-mode) is pretty addicting.
I'd give this a 4/5 but everything post-adachi feels unnecessary and kinda drags, true, it's optional, but it's still not really fun.

funky yosuke, rly want a vita so that ill finish it fr

The best game in the genre of 'Teenagers kill God through the power of Love and Friendship', also known as JRPGs.
With a collection of characters and stories that I didn't want to leave or end, I've never loved a game as much as this one.
Combined with one of the best soundtracks in video game history, and it's truly worth every penny.