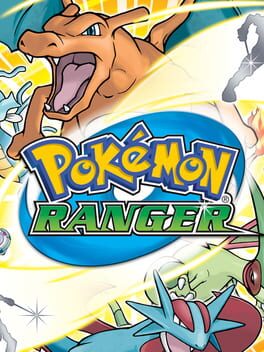 Pokémon Ranger is an action role-playing video game developed by HAL Laboratory and Creatures Inc. and published by Nintendo for the Nintendo DS video game console. The game was released at various dates, varying between continents. The game was first released in Japan on March 22, 2006 and was later released in North America and Australia during the remainder of 2006. The game's final release date was in Europe in April 2007.
Pokémon Ranger is compatible with Pokémon Diamond, Pearl, Platinum, HeartGold and SoulSilver allowing players to transfer the egg of the legendary Pokémon Manaphy to those games. This game is set in the Fiore region.

got stuck on pupitar and tyranitar Quite frankly definitely this series is among the best Pokémon spinoff games. Gameplay is pretty good and always has you experimenting with new Pokémon abilities in captures. Heavily deserving of a modern day remake. replayed this game for the first time since 2008/9 a little while ago. i definitely went in with nostalgia on hand because this was one of my favorite games as a child, but replaying it now, i still think that it is a really great pokemon spin off. the mechanic of tracing circles around the pokémons with the touch screen is really cool, and considering this was 2006 still, also very innovative. in general, every mechanic the game throws at you is very nice and nothing seems not worked out enough, even though they are very basic overall. i do think that the game feels way too linear for the type of game it wants to be, going from mission to mission with almost no exploration time outside of the zone you're restricted at, and only being able to explore once you've finished the game. i wish it would have more side content/missions featuring more travelling around the region like future entries would do. the story is alright, nothing too crazy for a pókemon game 3rd gen. you're a kid who arrives from an unspecified somewhere, you fight against criminally negligent grunts and leaders with very questionable motives for evildoing together with your super charming friend, and magically save the world at the end of the day. i did get super super tired of hearing the same intro to the 4 musician brothers around 10 times while playing the game, and by the end i just wanted them to shut the hell UP already. the ending to the game is very neat imo, and actually feels very epic, like its actually a battle of life or death, although the fights themselves against the legendary trio were way too easy especially if youre using help from your friendly pokémons. in comparison, the fights against steelix, flygon or charizard felt much harder and not being able to carry any friendly pokémon except your plusle/minum to the flygon ane charizard fights actually made me game over a few times. i also have minor criticisms about the lack of a real fleshed out post game save the kyogre/groudon missions and completing your pokédex (like in every other game) but then again, knowing this was the first game in the series and they would mostly fix this later games, i don't really mind, at least we do have those missions + red ranger. overall, this game is really enjoyable and funny, sometimes maybe being a little too repetitive or easy, but regardless of that you do still have a great time using the mechanics the game offers you. i can say that replaying this game did not disappoint at all :)