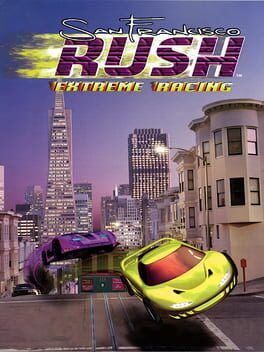 San Francisco Rush: Extreme Racing is the first game in the Rush series.
Tne N64 version contains six regular tracks and two hidden tracks. The regular tracks can be run in either reverse or mirrored modes and feature added collectible hidden keys throughout the track that can be used to unlock hidden vehicles. It also contains a Practice Mode and a Death Race mode where the game ends if the player crashes. The N64 port of Rush also includes a Circuit Mode and a save system for Fast Times, circuit progress, and hidden keys that the player can find on secret spots to unlock new cars.

My favorite racing game of all time. If you don't like arcade-style racing games, this game won't change your mind. But if that's more your thing, give this game a try.

San Francisco Rush: Extreme Racing is an outlandish racing game with fast cars, big jumps, unrealistic moon-style gravity, and crashes. There are only 6 tracks in the N64 version, but that's not a bad thing.

They range from easy to hard, and they have the option to be played in reverse or mirrored, so in a way, there's more than 6. Anyway, the car selection is simple. All the cars have a difficulty level to them, ranging from cars that are easy to control, but not that fast, to cars that are fast but control the hardest, kind of like trying to control a high-speed rocket.

The gameplay is simple, you drive with other bots or other players if being played multiplayer (the arcade version allowed for 2 cabinets to be linked together for 2 people to go head to head), and try to reach first place. There's a timer at the start of each race, hitting a checkpoint gives you bonus time. Failing to reach a checkpoint before the timer runs out means game over.

Hidden on every track is either a secret passageway allowing you to get ahead of your opponents or a key in a hard-to-reach area. Collect all of these keys on each of the tracks and you'll unlock new cars. Around each of the tracks is either a big jump or a ramp, hitting these not only looks cool but sometimes lets you fly past opponents. Hitting a wall or landing upside down will cause your car to explode, but you will shortly respawn (unless you're playing the Death Race mode, which I'll get to shortly) afterward.

Think of it as the video game version of a kid playing with Hot Wheels toys. Added to the home console versions are additional game modes, such as a standard circuit mode, a death race mode, where any cars that crash on the track remain wrecked, so if you crash, it's game over, and exclusive to the N64 version is a practice mode where you can drive freely with no other racers, allowing you to either get a feel for each track or just mess around on them.

The graphics for San Francisco Rush on the Nintendo 64 are okay at best. In my opinion, the arcade version looks the best out of all the ports, but there are some problems. Some of the foliage in the game ranges from looking okay to looking bad, the explosions don't look good, and there's a significant slowdown when all the racers are on screen at once.

Not that this game supports it anyway, but a positive about this game is that the Expansion Pak is not required to play it. The audio for this game is decent on one half, but kind of bad on the other half. Here's what I mean; the sound effects in the gameplay sound pretty good, the car engines sound nice, the tires screeching, the crash sounds, and the explosion sound effects sound good. (In the arcade version, the speakers are subwoofers, amplifying the sounds while you're playing, a positive touch in my opinion.) The announcer sounds good, too.

On the bad side of this, is the music. My god... the music. Anyone who's played this and heard the music might be a fan of it, and that's fine, but for me, it just becomes annoying really fast. From the in-game music to the infamous "What's your name?" song that plays when you have a top lap time, this game has some of the worst-sounding music in my opinion. Try listening to some Suicidal Tendencies while playing this. The "Lights... Camera... Revolution!" album should be fine.

In conclusion, going back to what I said earlier, if you hate arcade-style racers, this game will probably make you hate them even more. But if you're a fan of them, or willing to try something new, I recommend this game. Sure, the game has its faults and it's not for everyone, but you can have a good time with this game. 5 stars out of 5.