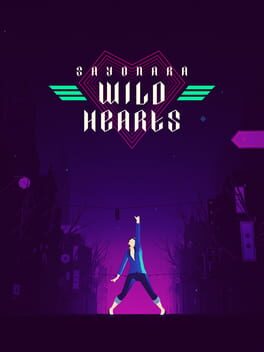 A POP ALBUM VIDEO GAME Sayonara Wild Hearts is a euphoric music video dream about being awesome, riding motorcycles, skateboarding, dance battling, shooting lasers, wielding swords, and breaking hearts at 200 mph. As the heart of a young woman breaks, the balance of the universe is disturbed. A diamond butterfly appears in her dreams and leads her through a highway in the sky, where she finds her other self: the masked biker called The Fool. Travelling through futuristic cities, dark forests, and electric deserts, The Fool sets out to find the harmony of the universe, hidden away in the hearts of Little Death and her star crossed allies; Dancing Devils, Howling Moons, Stereo Lovers and Hermit 64. Didn't really emotionally connect with it very much through the visuals or gameplay tbh. Though it had a handful of pretty great electropop tunes though, so props. Damn, I wish I liked this game more. Aesthetically it's on point, the OST is great pop music, and there's an entire section in the game that's just that dril tweet that goes "strongest blade in the world, howeve,r it is so fragile as to shatter when handled by any force other than the delicate touch of a lesbian ."

Sadly, as a game, this falters in a lot of ways. The game has an uninterrupted narrative with seamless transitions between areas, with an announcer telling you your score after each level during downtime. Visually, each song ends with a period of anticipation for a second, so obviously it's gonna just go into the next song immediately ri- hahahahahahahaha no you're yanked out of the game into an obnoxious level select with about ten seconds of animations your first time through. An actual, uninterrupted, seamless experience (like listening to an actual album would be) is only possible on a replay.

And replay you will, because this game's note placement is really annoying! Obstacles will obscure the highest-value items, the limited palette creates contrast issues in the busier stages, and the frequent perspective changes create pleasing visuals but disorienting controls. Dying is incredible forgiving, where you're sent back at most ten or fifteen seconds, with the only penalty being that your combo will be reset - a death sentence for a gold medal. If the continues are already this forgiving, why not just have the only penalty for getting hit be the score reset?

Note timing is incredibly uneven, with it sometimes aiding the visuals and score and other times feeling slapped-on to fill in downtime between setpieces, which is really weird to me when this game is already only an hour and fifteen minutes long.

This game's flaws stick out to me more because to me, rhythm gaming is all about the flow - Thumper has these long levels with seamless transitions between smaller sections, only giving your twitchy, aching thumbs respite after true survival. EBA is about hyperfocusing on specific segments that're broken up. Sayonara is somewhere between, forcing you to focus on individual segments that aren't that interesting to play on their own.

I really wish that this game had Album Arcade unlocked from the start or was just an animated movie. As I already said, it's an hour-and-a-quarter long, and yet it feels choppier and ruins flow more than games double and quadruple in length. I feel like I'm going against the grain of not only these reviews but my own taste, but I just really think that the gameplay drags down what could've been something really special.

Back to back bangers creating a cohesive aesthetic to chomp down on every minute, with heartpounding tracks to navigate ingame as well as listen to. It's a pleasant joyride that I enjoyed for the entire hour and a half-ish it lasted.

I'm going to be the jerk here and list a couple gripes, like how disorienting a couple of the tracks around The Hermit were and some things that just didn't seem reactable at first and required replays to get higher ranks on.

But overall, I think if you were interested in the trailer at all, if that music or the art spoke to you in any way you absolutely should give Sayonara Wild Hearts a try, so you as well can find some harmony of your own. (8/10) A feast for the eyes and ears