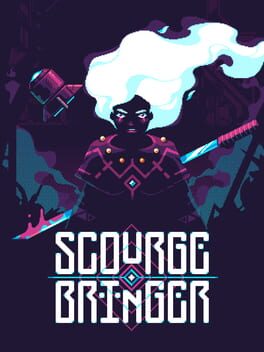 ScourgeBringer is a fast-paced free-moving roguelite platformer. Help Kyhra to explore the unknown and to slash her way through the ancient machines guarding the seal of her past, and maybe the redemption of humanity. A pretty solid roguelike. Best part is the movement and combat and the way the two go hand and hand. Honestly more repetitive than a lot of other roguelieks I liked tho, and def maybe a little too difficult/frustrating

Another game that I can recognize as probably quite good to others, but that I just can't get into. I love the art style, attitude and core gameplay concept, but there's just something small but off with nearly everything for me. Combat doesn't feel quite right because I don't like how the lunge while light attacking feels about half as long as it should and that it feels like the auto-targeting isn't as good for attacking as it is for dashing, or maybe that's just compounded with another thing I don't like; that the character's most defining aspect which you use to guide yourself as you play is their flowing, whipping white hair, but it's the same shade of whites and greys as the attack explosion animation that pops up when you hit things, making it needlessly difficult to navigate through the clusterfuck of enemies and animations. It doesn't help that the unlock system is miserable and of the kind that forces you to spend a dozen hours or two playing a beta version before you can play with all features available as intended. I was a little shocked when I noticed that you have to unlock even the combo system, which just seems like taking unlocks too far. If that's the best you can come up with, don't even include unlocks in your game.

This game isn't terrible, I just couldn't get along with it as much as one should and I just couldn't shake the feeling that something felt constantly off and as such wasn't enjoying myself. I forced myself to stick with it for another few hours even though I had never had any fun, since I always feel like I have to beat a game to get my money's worth, but now I'm deciding to check out of this one and move on to the next game.