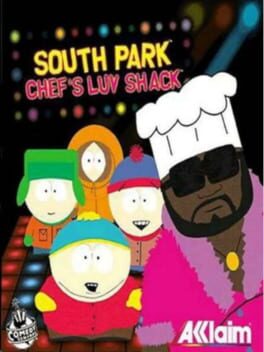 released on Oct 12, 1999
by Acclaim Entertainment

released on Oct 12, 1999
by Acclaim Entertainment

South Park: Chef's Luv Shack is a 2D game-show style video game based on the television show South Park. It gained its popularity by having mini games and the ability to play against friends in a challenge for the most points. It also involves trivia questions about South Park and other topics.
The game intermittently switches between questions and minigames, with a minigame proceeding every three questions. Players score points by answering questions first (correctly) and based on minigame ranking. Players lose points for questions answered incorrectly. The game is exclusively multiplayer, as when played by one player, there is no AI, so that player always wins, even with a negative score

Probably a damn solid time with a group, but it lacks any AI so there's no real fun to it whatsoever if you're alone, even if you're really into this early era south park kinda stuff (which was me around the time of playing this, abt 4 years ago)

However one time mupen64plus failed hard to emulate this at the time as well so there were some rather...jarring visual errors. Then it didn't happen again

no idea why this is rated so poorly. it's a fucking hilarious time with friends

So like does the kid that wins still get to fuck Chef?

A weird mix of a quiz show with general knowledge, Mario Party-esque minigames all with a South Park coat of paint.

The biggest downfall of the game is that when playing single player the other characters don't fill in as CPUs, meaning you're basically answering questions and playing minigames to try and win against yourself.

If you can somehow get some friends together I could see this providing a tiny bit of fun. Especially when it came out.