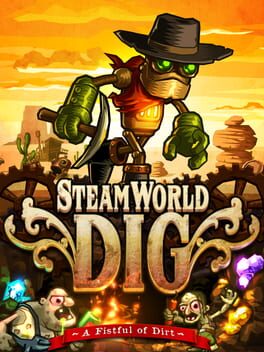 SteamWorld Dig is 2D a platform game that revolves around mining for resources and ores. The objective of the game is to investigate the mines underneath the old Western town Tumbleton in order to unearth the secrets lurking below. The player controls Rusty who is equipped with a pickaxe but the player is given options to upgrade the tools used for digging as progression is made in the game. Besides health, the player also needs coal for light, and water for special abilities.
SteamWorld Dig has platform elements in that the player runs, jumps and encounter foes, but the main objective is mining. That means that the player builds – or rather deconstructs – the game world and creates platforms that way. The player collects resources and other hidden resources which can be brought back to the surface and exchanged for cash. When the player progress in the game new abilities are unlocked. Each playthrough, the mines are randomized, making items and treasure appear in different locations. If the player gets stuck there is a self destruct function, but the players can also buy ladders in the store at the surface to get out of tricky situations.
When progressing deeper down in the cave, the player encounters various enemies with different attack patterns and weak spots. The game features multiple worlds, each with a completely different environment. Dying results in a reparation penalty fee, and the player respawns back on the surface. All the loot that has been accumulated when the player dies can be picked up again. Bought this game today for quite cheap in a bundle, though I finished it years ago in my 3ds. Its been long enough that I didn't feel bad about replaying. A short and sweet experience, took me about 4 hours to finish. Its a cool twist for a metroidvania, instead of a pre crafted level, you're given a pile of dirt and told to dig. So you do, making tunnels to go down and reach your objectives, but having to keep in mind to make them somewhat easily traversable, as you're going to be coming back and forth. Still, it really ends up not mattering that much because by the end of the game you have a lot of mobility and also teleporters, which are fairly cheap to buy, and can stick them anywhere to go to the town and back. Combat is barely a thing, with a very limited amount of enemies barely capable of moving from side to side, they rarely pose a threat if you're careful with your tunnels. I don't remember absolutely anything from the soundtrack, but it probably was generic spaghetti western songs, you most definitely know the one, and the visuals are not bad, it has a colorful artstyle, with my only complaint in that area being that the bloom looked weirdly terrible for me, so I had to turn it off. I think it was a bug. This game is not bad, but honestly very unremarkable. I've heard the sequel gets better, I should check that out at some point. Pretty short but fun game, if you enjoy the genre. I played it in one sitting and don't regret any single minute!

It's fine, the sequel is better in every way.

i am a dwarf and i'm digging a hole