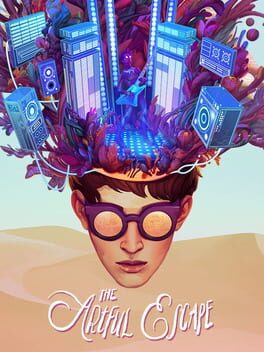 released on Sep 09, 2021
by Annapurna Interactive

released on Sep 09, 2021
by Annapurna Interactive

On the eve of his first performance, Francis Vendetti battles with the legacy of a dead folk legend and the cosmic wanderings of his own imagination. In this 2D adventure platformer, Francis, a teenage guitar prodigy, sets out on a psychedelic, multidimensional journey to inspire his stage persona. As an artistic display, this game is top notch thanks to a realm of psychedelic striking visuals full of colour, life and personality and an entire library of musicality to boot. Its an incredible sight to behold and a treat to listen to throughout.

However the game unfortunately falls apart when it comes to marrying all this artistry with both its story and its gameplay. As a platformer it doesn't really work, its all too basic and despite the plot repeatedly emphasising danger, there's never any penalty for failures and there's never any actual danger bar the occasional small pit.

As a music game it also falters too. Plot wise the game emphases finding your own path but when the game bullet points every main area with Simon-Says pattern repetition, it really damages its own narrative in the process. Sure there's moments to really make the game your own when it comes to costume design and backstory choices....

Its a blessing that the game is so strong in its audio and visual department that you'll happily rock out through its short runtime but overall I still wish they would have really played into the themes of individuality a little harder to make things truly work.

I really wanted to like this game. I backed it on Kickstarter years ago, and was bummed when the drive failed. I was really excited to see it come back all these years later. All of this just increased my disappointment with it.

The opening of the game makes a good first impression, a young artist struggling to stand out under the shadow of his famous uncle. I thought it would be a Night in the Woods-esque experience, but the gameplay ends up just being hold forward, press X. Occasionally play a Simon Says mini-game. It ended up being was more of an interactive movie than an adventure game.

Which would be fine if the plot was interesting at least. I didn’t feel like any of the themes it sets up were explored in any meaningful way, and by the big climactic final set piece I was bored and waiting for the credits to roll.

I got kind of similar vibes to Genesis Noir from this, outside of the obvious musical/artistic wavelength. Both games celebrate or exemplify improvisation in their aesthetic, and both are, to put it politely, pretty uninterested in mechanics at best. I would go as far as to say at worst the mechanics here even fight against the story's core.

Games with rhythm or Simon Says elements are difficult to get right outside of a few select templates I feel. Rock Band and Guitar Hero sell you on being a rock star in a band, so when you play your favorite songs note-by-note, whether with friends or alone, it accomplishes that pretty well through the plastic instruments and presentation [and of course it helps to offer scores for those who crave the chase]. And there's value to just capitalizing on the appeal of playing to a rhythm and getting into a groove, in games as wildly different as Crypt of the NecroDancer and Rhythm Heaven.

But using Simon Says as the central mechanic in a game about marching to the beat of your own drum and fighting tradition and expectation? In Artful Escape there is improvisation at times, usually on your way to the final battle in each scenario. You can hold a button to play your guitar to light up the world around you if you desire, and there are locked platform sequences where you get to improvise notes with five buttons. They're fine, not that exciting but pretty colorful and ultimately welcome. There is also a point in the story when you're allowed to design your wardrobe, a wonderful moment for expressing your inner rock star.

But when it comes down to it and you reach the story battles, improvisation is reduced to how quickly you play notes. You still won't progress unless you play the notes indicated for the battle, in order. They're not presented as the notes that come from within, because the indicators are literally a part of your opponent. I would add that these mechanics are slightly clumsy in how they're presented, but that was minor to me compared to the general sense that I was playing a story about self-expression and, in its biggest moments, basically wasn't allowed to do that at all. The only real positive to them [outside of the game's obvious excitement for music] is that they're incredibly short.

The story still ends up being mildly sweet and endearing, and the aesthetic and music come together to make a pleasant, short experience, in spite of it being a little boring to play [didn't even mention the ho-hum platforming that's... there]. Also the voice cast is a wild journey, including Carl Weathers, Jason Schwartzman, and Lena Headey, so that's pretty fun! The Artful Escape is a coming of age space opera about being true to yourself that is also a complete audiovisual treat. The story is simultaneously simple and over the top but remains well written throughout and it's also nice to see an Annapurna game with a star studded cast have more to work with than previous attempts this year, fitting in more naturally with solid performances and not overshadowing the game itself.

Outside of some light platforming and Simon Says sections there isn't a whole lot in terms of challenge, but for me the lack of a challenge is actually a benefit to the whole, tying in with a theme about playing what you want to play in the way you want to play it.

The slick animations and vivid, colourful landscapes certainly help with this as does an absolutely killer soundtrack, from folksy beginnings to full-on electrifying Bill & Ted-esque solos. Another boon is having a dedicated button in each level to shred your guitar along with the background music of each environment you visit, something which never got old. Really loved this, only downside for me were the platforming elements which needlessly interrupted the flow of the music without actually adding anything to the game. Other than that though! Great!!