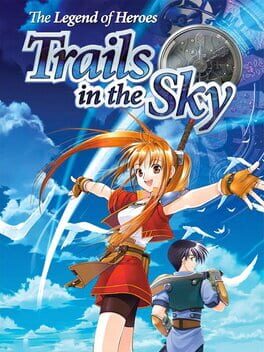 In the kingdom of Liberl, a man named Cassius Bright serves as one of the land's greatest Bracers, a freelance organization dedicated to keeping peace and helping those in need. When he is called off to business in the neighboring country, his daughter Estelle and his adopted son Joshua take on his work as upcoming Bracers. But when the airship he was traveling on vanishes, his children seize the task of discovering the truth behind the incident, and rescuing their father. From the makers of the Ys games comes a series of RPGs telling a legend of adventure, political intrigue, and mystery, with a tale of growing up at the core. With a mix of turn-based and strategy combat, and an equipment system blending traits of famous games like Final Fantasy 7 and Chrono Cross, battles will cause unique builds and plans to handle many different situations and allow for different play styles. Wonderfully detailed characters abound, even to the smallest NPC, and the player will find themself taking the world in at every turn. Trails in the Sky sets a new standard for making an enjoyable and immersive RPG.

Rance 01 without the Soul

The Legend of Heroes: Trails in the Sky FC is basically a guide to rehabilitating serial killers. That statement will make absolutely no sense until the last 30 or so minutes of the game and that fact is particularly what makes FC is good.

Up until the ending, the plot primarily concerns itself with the impact Cassius Bright had on the Liberl army by leaving them to become a bracer. If we consider there to be 4 major twists throughout the course of the story, that was the first one. The second occurs when it is revealed that Colonel Richard, one of Cassius' "worshipers", is behind the series of events that disrupt the harmony in what is otherwise a lighthearted adventure. This wasn't difficult to predict since he was introduced mere scenes apart from when the story brought up the idea of there being a rat in the army. It’s not the most compelling motive, but it makes sense. For now, that’s all it needs to do so there's no issues in that department. We get the 3rd of our 4 major twists at the end of the final dungeon. This can be summarized in 3 words: Ancient fucking robots. For some reason, introducing a less relevant final boss that undermines the main antagonist is more common in JRPGs than you'd imagine. However, this doesn't impact the story negatively. After the final twist, its implied that this will factor into SC, serving as a set up above an epic climax that giving finality to the overarching storyline. Much like everything else introduced in FC, how the 2nd installment in this series follows through with these developments will largely influence how well these twists hold up.

Structurally, FC is solid. The bulk of the game comprises of Estelle and Joshua running around Liberl to collect recommendations from the 5 bracer guilds. Accordingly, this allows the game to be broken up into 5 separate parts, each getting their own chapter. From here, they can be broken down further with a slice of life section and a heavier section that builds toward the chapter’s climax, intertwining with the story’s political intrigue. For all intents and purposes, this structure is perfect for what FC sought to accomplish. Despite slowing the plot’s progression, the former section for these chapters holds just as much, if not more value than the latter. Though, it’s not difficult to determine that the slice of life has value early on. Estelle is actively developing throughout the story as she’s realizing her non-blood related feelings for her non-blood related brother. Through her relationship with Joshua, we’re seeing Estelle grow as a person altogether. Much like their quest for bracer recommendations, the stages of Estelle’s development can be divided within those same 5 chapters.

Of course, this isn’t the sole purpose for those slice of life sections. The 4th twist that I left out earlier recontextualizes everything we thought we knew about the game we were playing. FC is clever in masking that fact until those final 30 or so minutes. Unlike Estelle, we’re not witnessing growth from Joshua. Naturally, this makes the audience feel less involved with his side of the relationship. All Joshua has going for him at this point in time is the promise he made to Estelle about revealing his backstory. Prolonging this reveal until the very end proves to effective in how the twist impacts the story by adding an entirely new layer of depth to the slice of life. This is capitalized on immediately afterward. FC uses its closing video to take a look inside Estelle’s picture book, using photographs to show us glimpses of what happened during that 5 year time skip after Joshua’s failed assassination attempt on Cassius Bright. What was once a distant, cynical look in Joshua’s eyes gradually transformed into the warm gaze of a brother who found his place in the world growing up beside Estelle. It would be no stretch to say that the plot twist IS Trails in the Sky FC as it is not only the perfect knot on a well-constructed narrative, but a fantastic set up for the next chapter in the Sky trilogy.

There's far more to say about this game’s writing than what goes on in the story itself. It’s impossible to talk about FC without mentioning the sheer amount of effort put into the NPC dialogue. This is most prominent in the prologue chapter where just about every NPC has some sort of relationship with Estelle. This leads to many interesting conversations that are far lengthier than you’d expect from non-story related dialogue. Many of these NPCs even update their dialogue after certain events that are relevant to that area pass by. This extra effort can also be seen through other quirks, such as every treasure chest providing additional text after being emptied. It is a testament to how much these writers love the world that they crafted.

This isn’t to say that FC featured masterclass writing throughout. While the overall package is an undeniable success, there are still times where the quality of the writing is questionable. Story conveniences and illogical actions from the characters are still very present. One of the most notable instances of this is when Mayor Dalmore is ready to shoot a frozen Joshua with the intent to kill. During the period that the Mayor notices Joshua breaking out of this state, rather than shooting while he still has the opportunity, he chooses to run away with his gun instead. This allows Estelle and Joshua to chase him down, ultimately resulting in his arrest. We see a similar sight earlier that chapter when the mysterious men covered in black fail to kill the party. In order to ensure their escape, they take out guns, forcing everyone to stay back while they run away. Maybe there was a reason for them wanting the party to live that will be revealed in SC. I'd reserve my judgement until then, but seeing as a similar instance was already pointed out with Mayor Dalmore, I'm not too confident about that happening. It can’t be said that this has a substantial impact on the storytelling, but these issues should be acknowledged regardless.

Due to FC's dedication toward developing Estelle and Joshua's relationship, there is not too much to say about the supporting cast. Schera and Olivier would be the obvious standouts in an otherwise forgettable set of party members. Again, this is not an issue since it is merely the first installment in a trilogy. Yeah. That's really all I have to say about this.

To be honest, I do not care to expand on other aspects of the game either since my reason for jumping into this series was to experience the story. It doesn't help that the gameplay as a whole could use a lot of refinement. That said, I'll be brief about expanding on this. FC's magic system can be likened to FF7's materia, both in world building and the freedom to assign whatever skills to whatever party members. Since there are no unique skills or quartz among party members, they are instead distinguished by an assigned element that they are forced to equip, with the exception of Estelle. This was a poor approach in offering variety since it only serves to limit, rather than actually show distinct qualities from each party member. Fortunately, S-Breaks do a better job at accomplishing this since everyone has their own unique set. The grid-based combat is a refreshing approach in a standard JRPG. My stance on this is conflicted since it heavily relies on magic to make the gameplay not feel tedious. Not only does magic require a wait time before casting, but it's the only means of attacking from across the grid if you're too far from the enemy. I find myself in multiple occasions relying purely on magic and S-Breaks to attack because I'm still going to be wasting 2 turns doing nothing but moving in a standard encounter regardless. Simply put, it’s a system that likes to make you wait. There's also the other distinct quality of not wanting you to see the math involved in the combat. Perhaps Falcom knew that people only cared about the story, so they purposely dumbed down certain aspects of the gameplay, such as seeing numerical values assigned to damage. Being one of those people that Falcom accounted for, I didn't really care, but it’s also difficult to say that it makes gameplay feel as strategic as it should. That wasn’t as brief as I anticipated. Oh well.

Trails in the Sky FC is good. I’m going to publish this and then play SC.

good shit, really charming though a bit slow at times.

This game is the

Trails
In
The
Sky Manages to introduce its characters progressively, future plotpoints and setup quite well. Suffers sometimes from the story not being able to hook up the player because of its more lighearted tone and pacing, especially during chapter 1. Seeing the journey of Estelle and Joshua opening up to the world as they progress through the bracer ranks, and showing Liberl was a nice way to introduce organically the concepts, background and traditions of the world. Nonetheless the sidequests can become repetitive and don't flesh the world or push the gameplay in the way they could have, having fewer but that go more into detail of characters or sidestories would have been a better approach.Gameplay is satisfactory, letting you figure out the orbal arts and combinations for the quartz and S-breaks being a creative way to tip the balance.