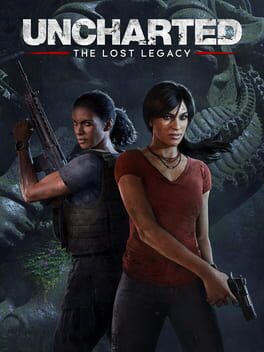 From the critically acclaimed developer, Naughty Dog, comes the first standalone adventure in the Uncharted series. Fan-favorite character, Chloe Frazer, must enlist the aid of renowned mercenary Nadine Ross from Uncharted 4: A Thief’s End in order to recover a fabled ancient Indian artifact and keep it out of the hands of a ruthless war profiteer. Together, they’ll venture deep into the mountains of India in search of the legendary artifact. Along the way, they’ll learn to work together to unearth the mystery of the artifact, fight their way through fierce opposition, and prevent the region from falling into chaos. I am nothing short of impressed by this DLC. The level layout is just incredible here. So. Much. Sexual. Tension.

It's nuts how bad this game was in the beginning. To my surprise, though, the game just kept on getting better and better to the point that some of its best moments surpassed previous Uncharted games' most notable events. The banter between Nadine and Chloe was initially the worst, but by the end, it became very endearing. The villain is the best in the whole series since he had a very calming presence, yet you could see internal malice that is waiting to pop out (I'm a massive fan of this archetype). Sam Drake was a nice mix to the leading duo later on in the game, and the context from the fourth game made the interactions even better.

It's as if the creators were trying to piece a huge 100,000-piece puzzle and finishing it with a beautiful image. When you compare it to Uncharted 4's million-piece, however, it's clear to see that image can only go so far. The game has a similar course of action to what the first three games were like only to have some of the emotional depth from the fourth game. I say "some" because the runtime of this game is about half of Uncharted 4's, which leaves the sensitive bits in The Lost Legacy to feel lackluster at best. The gameplay is what you expect; if you played Uncharted 4 in particular, you'd feel right at home. The game is overall just a satisfying experience that I'll look forward to playing again in the future and would recommend it to those who have experienced previous Uncharted games and want more.