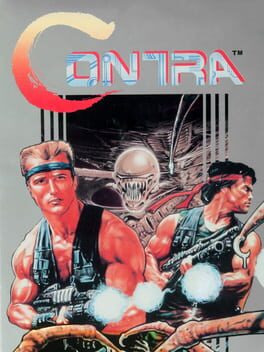 The moment you press start and gain control of your character after booting up Contra and hearing that instantly recognizable 7 note jingle and loud 8-bit explosion sound effect on the title screen, you have essentially played every game this series has to offer and experienced what Contra is all about.

Contra immediately indulges the player's instinct to charge his way through the screen with a sprinting-sommersaulting Rambo inspired sprite that fires unlimited satisfying sounding bullets as a flood of enemies fill the screen ahead of you, which is then immediately contrasted with how absurdly fragile your character actually is when compared to other sidescroller protags, dying with one single hit and having to start all over again after a measily set of 3 lives is depleted.

While these days you have to tip toe around discussing difficulty in games because someone might get offended if you tell them that beating a game with save states isn't the same as beating it without them, it was understood that Contra players who beat the game were divided into 2 camps: the ones who used the 30 lives cheat code, and the ones who didn't. Although playing Contra with the 30 lives code still provides an exciting and engaging experience, and I have to give major props to Konami for normalizing its existence as an alternative, it's only when you start giving a default run a serious try that the beauty of the game unfolds.

The exhiliration and sense of triumph you get out of conquering each stage without a single death, as you get into the zone and start to unveil the matrix behind every jump and bullet, and you defeat the final boss on a Xenomorph inspired last stage, stands at the peak of the art of difficulty that characterizes this era in videogames that so many of us have (joyfully) struggled with. A game that is always within your control, if you decide to actually reach for it.

Contra would go on to have a respectable number of sequels in its catalogue, many that I would even consider better than this first entry, but it's interesting how they all have left the core gameplay mostly untouched and focused their attention mainly on the bombastic action spectacle presentation of the series. Maybe that's because Contra hit a home run on its first try and Konami was wise enough not to mess with the formula, and as it stands 35 years after its release, it is still a fresh and unique 8-bit experience worth going through.