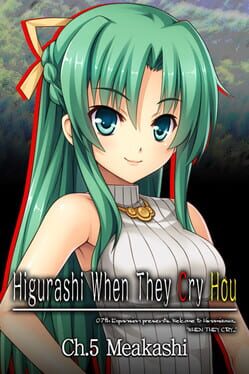 (so like, I just want to preface this by saying that I don't really write reviews much, so if this is kind of bad have mercy on me lol)

Honestly, Meakashi is probably my favorite arc of Higurashi, mostly because I think Shion is a wonderfully-written and compelling character. It definitely differs from most arcs in that it is basically a character study of one specific character (Shion), a lot of which takes place while she is by herself or consumed by her thoughts.

While Shion certainly becomes someone irredeemable by the end of Meakashi (a “demon”), I think it’s important to discuss what actually brought her to that point. While often presenting herself to others as confident, fun-loving, and friendly, she is in actuality a very lonely, cold, self-loathing, and manipulative person. Her whole life, Shion has been abused, rejected, and neglected by her family and faced exposure to violence from a young age due to their criminal activities; these factors have left a lasting impact on her mental health. She’s essentially abandoned at a boarding school that she despises, and when she escapes to Okinomiya she must live in isolation to avoid being caught and tortured by her own family. Whenever she does go out, she must dress up as her sister to avoid detection. It’s around this time that Shion meets Satoshi, and immediately fixates on him when he shows her kindness, highlighting just how isolated and lonely she has been for most of her life. This obsession intensifies once she discovers that Satoshi lives in an abusive household, and she begins to see herself in him.

The true decline of her mental health happens when she reveals her identity while standing up for Satoshi, and is caught by the Sonozakis. While the next scene is pretty infamous and obviously deeply traumatic for Shion, the saddest part about it is that she honestly thinks someone will stand up for her- but no one ever does. After this, Satoshi goes missing, pushing her further into a depression.

The second half of Meakashi is essentially Shion being pushed to her breaking point and seeking revenge not only for the treatment she had to endure her whole life, but also for Satoshi’s disappearance, which she blames on the Sonozaki family. While her revenge initially started as an accident, she finds herself unable to stop. As this goes on, it becomes increasingly harder to sympathize with her as her bitterness and anger manifests into cruelty towards people that she knows weren’t even involved in Satoshi’s disappearance or her abuse. Much of this violence towards others is her externalizing her self-hatred as well- for example, she hates Satoko not only because of petty envy, but because she projects herself onto her. She is upset that Satoko is stronger than her and always had someone to protect her when he was still around, while Shion herself never had this when she needed it the most. She desperately hoped that Mion or her mother would stand up for her against Oryou the same way Satoshi stood up for Satoko, but they didn’t- and this makes her furious. Her harming Satoko shows that while she acts as if her actions are for Satoshi, they are actually completely selfish. She knows this deep down and even admits it near the very end of the arc.

It’s not only Shion that makes this arc good- Higurashi is a psychological horror game after all, and this is one of the most genuinely unnerving arcs in the series, especially near the end when you are trapped in Shion’s mind as she tries to justify her increasingly violent decisions. The mystery element is also strong- while this is the first “answer arc”, and it certainly does clear up the questions from Watanagashi-hen, it leaves the reader with a long list of still-unanswered questions, and leaves you wanting to read on and unravel the rest of Hinamizawa’s tale. Another thing I love about Meakashi is how it captures Shion’s mental state following her escape, and her overall feeling of aimlessness post-trauma. The complicated feeling of wanting to recover, but being unable to shake your hurt and bitterness, constantly retreating into your memories, and just feeling… stagnant and unchanging, is genuinely so perfectly captured.