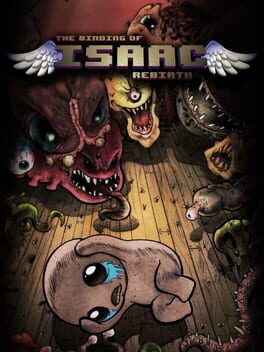 reviewed The Binding of Isaac: Rebirth

I don't really play procedural run-based games, but I heard this is one of the best so I played a few hours. I did the 'first steps' of beating Mom, and then completing another run and beating the Utero level. It seems there is at least another 10,000 hours of gameplay. I might play other characters or try challenges.

I think it feels strong in how you're always betting whether the risk of uncovering a new room will bring enough rewards, but I also think the core of it (this intentionally imprecise teardrop firing mechanic) ends up feeling a bit repetitive.

I appreciate that the core motion and attack mechanics can be tweaked in tons of ways to be slightly better or worse, and hence, the appeal as a procgen game.

That being said, even though I know I'll have a different experience each time I play, there's still something very samey to it no matter what.

I guess that's where I differ from other fans of the genre. I do think it's neat how there are obscure secrets and branching runs (reminds me of the arcade shmup genre), I suppose in some ways the modern indie roguelite is a continuation of arcade action. But I think in BoI (although it feels like one of the better ones) still does feel like this experience of starting very weak then hoping to become a very powerful build by the end, the chances of trying your luck. Going through rooms feels like going through the filler rooms in a Zelda game.

Overall, it feels like the experience of having the same sandwich spiced a randomly different way. A nice sandwich, but still a pretty plain one...

The most powerful idea of roguelites to me is the idea of hiding secrets amongst a texture of randomness. I think it's cool how deep the secrets in BoI go.

Although as a designer I feel kind of iffy about inherently making my game sorta repetitive and meant to be played over and over for 1,000 hours. But I like the idea of getting to become familiar with a 'space' by seeing it in randomized parts. Maybe there's a way to distill the randomness/replayability procgen strength of stuff like BoI into a shorter experience, who knows... it'd be cool to leverage that into a somehow more straightforward narrative game.