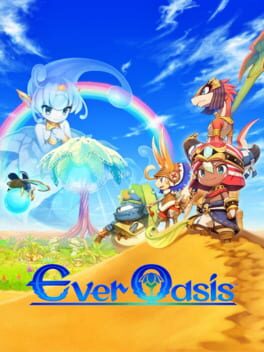 Good example of a game that is badly in need of both design craft and narrative theme. On paper, the game sounds interesting enough: revive a town through shops and farming, adventure the nearby landscape with shopkeepers, dive into dungeons..

Customizing the town (at least a few hours in) only involved placing a few shops and some other items to optimize their income. Restocking shops involves a process of farming for particular materials, walking into the shop and restocking. As the game gets bigger you have more shops to restock. I guess the idea is that the player was supposed to be sort of a supplier for the town, but the NPCs' dialogue didn't feel particularly interesting.

Made worse is that grinding for these items is a little boring. The combat isn't that interesting, the environment you find enemies in ranges from empty large maps to dungeons filled with boring mechanics reminiscent of the 3D Zeldas' boring puzzles. So if you need to restock, it means going to a dungeon and finding an enemy that you easily kill. Because there's SO MANY materials, I would assume this kind of gameplay loop would occur a lot through the game.

The dungeons are bad - for some reason the Zelda Items needed to do the (boring) puzzles are tied to party members, so you need to bring a mining person to mine ore, etc... puzzles seem simplistic or perfunctory, the combat doesn't really use 3D in an interesting way...

So overall, you have a combat/exploration loop whose combat isn't fun, nor exploration interesting. And that feeds into a town management loop, which is tedious, simplistic and slow (to farm you have to walk to the farm screen...load.. etc). The Town is 3D and explorable, but there isn't much to explore or see (like in a harvest moon town), it would have felt more efficient to merely make everything into menus? Or to shrink the size a lot more or improve fast travel.

Simple town management could be cool, but it would only work if it was feeding into an adventure experience with more well-designed and interesting things, or narrative hooks. But Ever Oasis feels like spending time in one flat system in order to make the numbers in another flat system go up.

I think the number of shopkeepers could be way lower. Lean into making them actually interesting characters, tie them to the environment in some way so that there's a desire to go out into the world. Create some kind of motion that makes it actually interesting to run around. Make the shops interface in more interesting ways with the combat/exploration systems, etc...

Ever Oasis reminds me of why 'lots of game systems!' games can fail, in that if none of them are given ample design thought, there's a risk of nothing interesting happening - sure, the systems feed into each other and make numbers go up, but there's not much meaningful outside of that. (And there's already a genre for 'number go up' that streamlines and gives lots of thought into making number go up - clicker and idle games!)

Anyways yeah. I guess I like the spirit of this game, but it doesn't do anything particularly well, which is sad. I think the setting of exploring outwards from a town, going to the countryside, etc, is really interesting!