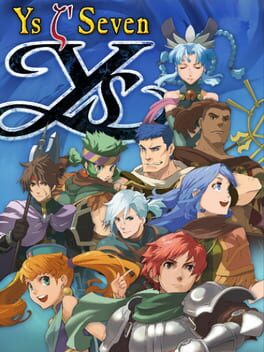 More fun than Ys 8, but you can slowly feel the series losing its identity here. The weapon type system is bizarre and annoying, constantly breaking the flow of fighting. The shallowness caused by removing jumping is 'balanced' by a guard and dash move (which you always have to spam to move quickly around the gigantic maps), there's no fast travel for at least the first few hours? The feeling of being 'stuck to the ground' and my eyes glued to the minimap reminds me of the worst bits of games like Zwei 2.

There's so much loot and the gains you get by upgrading weapons with them feel minimal to the point it's easy to just overlook it entirely. It feels so routine to have to clear the enemies, stand at a item pile for 5 seconds, etc... cross-check if you can upgrade...

Still, the combat is fast paced and fun in the times it's working. It's a bit simple as far as the regular enemies go but fast paced enough that you have to do a little dodging.

I actually still like the boss design at this point in the series, even though the presence of healing items kind of balances it out in a weird way - I only died a few times to the first 5 bosses or so, so there wasn't much of the fun you get from Ys 6/Oath where you are constantly dying to get a sense for how to move in response to the bosses. It also feels far less dramatic because you don't have that sense of verticality that bosses in earlier Ys games utilized via your jump ability.

Overall, a fairly flat experience (so far - I quit at the fire temple). Also way, way too long! Quests are bizarrely hidden, you have to talk to 50 NPCs spewing nothingness before finding someone who tells you to run back and forth for 10 minutes to give you 4000 gold.

I still don't know how the later Ys Celceta will be, but if it's a bridge in between 7 and 8 (with the completionism of the forest) then that's not a great sign. 7 already has some of the later completionism, through the NPCs who ask you to find 10 of each type of wood, or find special gems.

I think over the past 15 years the Ys series seems to have lost some sort of leadership that really pressed the game to have a unique action identity.

It seems that, via osmosis, the bland ARPG design of the Japanese game industry slowly seeped into Falcom over those years. (But if Ys 9 is anything to go by, at least Falcom's action still tries to maintain an interesting simplicity, even if it's come to rely on bland parries and dodge rolling and has been poisoned by the "40+ hours of playtime!" completionism that's rampant across the industry).