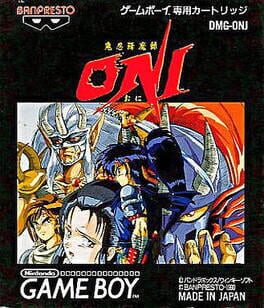 Update after finishing: except for a few interesting plot twists, the gameplay remained the same. A few dungeons had you needing to escape a bit to not run out of heals, but it never got intense enough that I had to run. (And more grinding was always the answer)

The stat curve balloons bizarrely near the end- you go from like 1000 to 3000 hp in a few levels.

Haven't finished but I don't think my opinion will change much:

This is the first installment of a bigger series. Apparently this first game is pretty bad (according to the fan translator), I would have to agree.

You play the role of a... Japanese person... who also has powers to transform into an Oni/demon. To discover your power, you travel between different islands (set in Japan, although it's often unclear where you are at any time) and explore dungeons/towns, alone, Dragon Quest 1-style.

I think this game was rushed. Every village looks exactly the same, stores aren't labeled, it's possible to overlook entire towns (and sets of armor). Often entire villages will be murdered or die but the shopkeepers will still be there speaking normally.

The progression between continents is strange, completing a key task (getting a ship) will actually just instantly warp you from one continent to the next. There's no world map.

The writing is sort of funny - villages are plagued by pretty straightforward tropey occurrences - demons requiring sacrifices, kappa or tanuki gangs threatening villages, demons impersonating others... you'll go up into mountains or into caves to look for stones to let yourself transform. NPCs seem to be sort of exasperated about their lives ("I hate farming!") or ("The taxes are so high!") . It's a little amusing, but there's not much depth there.

I liked the enemy sprites. The battle system is fairly flat so far. The one on one combat hasn't felt interesting yet - pretty much it's always healing every other turn and making sure you have enough attack power to take down the boss. You get a wide variety of spells but they don't seem to do much more damage than your sword.

One interesting idea is the ability to transform into... an Oni form? I'm not sure, but you get this cool suit of armor. However, it makes your attacks like 50% weaker, although you gain a huge boost in defense. It reminds me of Lightning Returns' costumes system, except... extremely minimal and clunky, haha. No battles have required using this to any interesting extent. You get access to some powerful spells, though, but even that hasn't been used too much.

You can only save at towns (which costs 5 gold, always, for some reason), and dungeons are fairly boring/repetitive as you're always choosing Attack and fighting one of three enemies, so not using save states in this game seems like it'd be frustrating and rough, if one were to die to the boss.

Overall, definitely feels rushed. Historically amusing but not that great of a game. Curious about the later installments.