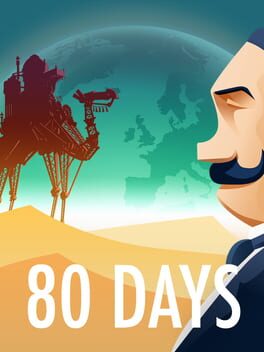 The year is 1872. Welcome to the future. Phileas Fogg has wagered he can circumnavigate the globe. Hundreds of journeys, thousands of routes. Travel by steamer, express train, airship, hover-car, hydrofoil, gyrocopter, camel, horse-back, hot-air balloon... Can you make it in 80 Days? One of my favorite games, do a playthrough pretty much ever year or so. Really relaxed and feel like I learn a lot about geography and the world in general, even though the game takes place in an alternate universe steampunk world. Great writing.

Sorting games by genre is usually so natural that we do it without thinking. If asked to describe your favorite game, the first words will usually be something like “It’s an rpg where…” or “It’s a survival-horror game that…”. It’s a useful method of categorization, but problems arise when a game doesn’t fit into a singular box. If you were to look for the best Action RPG’s of 2002, you might find Kingdom Hearts and Morrowind on the list, when they play nothing like each other. That’s why you’ll often see “game”-like pseudogenres develop for these cases, like Roguelikes or Soulslikes, more directly tracing a game’s core influences. So, while 80 Days might be called a visual novel, the best description might be an Oregon Trail-like Adventure game. It loosely follows the novel Around the World in Eighty Days, with your goal being to make a similar trip across the globe. However, you are free to choose your own path, and may end up anywhere in the world. You might be so efficient that you make the trip in forty days, get sidetracked and miss the deadline, or die by some terrible misadventure. Just like Oregon Trail, you have to manage your time and funds, but without the need for repairing vehicles or gathering food, the challenge lies in being a savvy explorer who can get good information out of people and avoid potential dead ends. The wittiness of the dialog reflects the sharpness it expects out of players, and paying attention to all the world-building details is rewarded. The punishment for failure is dire, requiring a total restart of the game if you die or want to restart with your new knowledge. It’s good that players have to take things seriously, but without manual saves, checkpoints, or the ability to skip dialog, replays are tiresome. With all the potential routes and different events across the world, these handicaps ensure most players will only see a fraction of the game’s content. I really want people to explore this game, but a wholehearted recommendation is difficult when the game itself seems to not want players to delve into it fully. At the very least, it’s worth the price, but try to make that first playthrough count. played this tonight and sucked anna into it. what an adventure! so well done on almost every front (the autogenerated convos are... not one of those fronts) but wow meg jayanth created the best choose your own adventure ever! and it's so full of wonder and fear while being comfy. this time we didn't make it. i went and picked ariya up from work, and anna spent a week stranded in singapore, and then fogg got cholera.

80 Days binds the fantastic to the mundane. Repack your suitcase too slowly and you’ll miss that once-a-week train to a city full of robots and riot. Big choices or small, great interactive fiction doesn’t discriminate.

You encounter wonderfully diverse – and historically overlooked – people on your journey. As they share their stories, your servant-character too begins to define himself beyond his oblivious master and a vain 80-day wager.

This evokes a richer sense of world, beyond Jules Verne’s imagining, and something essential about travel: that feeling of missing out. How one choice eliminates countless others. How once is never enough. A great little game that embraces completely non-linear narrative. Each adventure is a completely new experience with its dificulties and small subplots. Loved it. Still need to complete the journey in 80 days, missed by 4 days on my first try. :D