released on Aug 28, 2018
by Annapurna Interactive 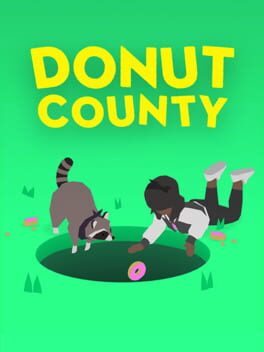 released on Aug 28, 2018
by Annapurna Interactive

Donut County is a physics adventure game where you control a hole in the ground. Every time you swallow something, the hole grows a little bit bigger. Delightfully weird narrative puzzle game. Big Katamari vibes - you gradually suck up objects and people and grow larger and larger, but this time you're a hole and not a ball. My biggest complaint here is the brevity and slightness. I wanted more than like two or three hours of this fully realized art design, and I felt like the levels were only just starting to get creatively challenging by the end of the game. Still a real treat and I'm looking forward to the rest of this Annapurna Collection. I was so happy to finally play Donut County (Xbox always surprises me with the cool indie stuff they add to Game Pass.) Not only had I heard good things about it from friends, but I was absolutely enamored with the visual style of its promotion art. I didn't even know anything else going in; I just had a feeling that I would really like it.
... And I was right! DC is a very pleasant, relaxing experience, that's near-flawless stylistically. It doesn't overstay its welcome, either. The (approximately) 2-hour length means there's no padding. It's compact, leaving no time for you to get tired of the story or mechanics. It does what it wants to do, then it ends. It's a perfect 'in-between' title.
Turns out I played it at a perfect time, too, with Neon White just being announced! I'm super excited to see Ben Esposito's next project.

Visuals:
There is such a beautiful, unique art style permeating Donut County. So much sets it apart in this regard. Like I mentioned, this is what drew me to it initially.
I'll address the graphics first. While they ARE relatively simple, they're charming in their cartoony style and cuteness. But even if someone still had complaints about them, I think the color usage is more than enough to appeal to everyone. Everything is so bright and fun to look at, but it's also purposefully designed to not be overwhelming. DC makes excellent use of more subdued (but still pretty) background colors, so that characters and items on top of them can pop. It's perfectly balanced.
Speaking of, the character designs are all memorable and pleasant as well. Each townsperson is wildly distinctive. I love when games take liberties here; it's almost always so interesting and fun. And, of course, you can't go wrong when one of your protagonists is literally just a raccoon.
Another small detail I love is the pause menu - the background is a psychedelic effect of whatever was on-screen when you paused. It's very cool.
The only thing the game really lacks is strong movement of any kind, but everything else here makes up for that in spades; in fact, it uses this 'flaw' to its advantage for some pretty funny visual gags. In nearly every way, DC fiercely succeeds in being a visual delight. I will always, always prefer games that prioritize unique visual presentation over triple A realism.
Overall, 4.5/5.

Sound:
The soundtrack here absolutely blew me away. I was not expecting it to be this amazing - in fact, it's probably one of my new favorites. The calmness of it perfectly accentuates every other aspect of DC (such as the visuals, gameplay, and level design.) But what's most impressive about it is that, without exaggeration, it's nearly the length of the game itself. That means there's a new wonderful piece of music being shown off about every two minutes.
Something else I think DC does remarkably is utilizing a LACK of music. There are levels where a track will only begin playing after a certain point; there are ones where it will stop after a certain point. Music will sometimes pause abruptly to add to jokes during dialogue. It's all executed really, really well.
Overall, 5/5.

Story:
While Donut County does live up to being a simple, cute puzzle game, it also has surprisingly topical themes. The plot is a thinly-veiled allegory for gentrification and consumption under capitalism - but it's told in a digestible and accessible way, through endearing cartoon-like characters and a charming world. Best of all, it never sacrifices those things (or its relaxing atmosphere) to tell its story. This does also mean that it's decidedly unsubtle at times, but I kind of like it that way. It's upfront about its distaste for the stuff it's criticizing.
Do I think it's the best political commentary to come from the industry? No. Because of the short length and simplicity, it's not a very emotionally investing story. And because of how literal it is, there's not much depth to be found. But it's told in such a unique way with the cute packaging. The tone and metaphor utilized make it completely approachable. I can't help but really enjoy it, even if it's not perfect.
On top of that, the writing is actually good! There's a lot of media out there that has tried and failed spectacularly at this internet-type humor. Donut County tries and very much succeeds. The dialogue is delightful and funny, while also remaining short so that it doesn't overwhelm. There's some great comedically-timed jokes. The descriptions of the items made me laugh quite a few times.
I know that humor is a subjective thing, so I won't say that what's here will be for everyone. Still, I have to commend DC for doing what many others have fallen short with. Whether you find it personally funny or not, I think the game is written well.
Overall, 3.5/5.

Gameplay:
The gameplay in DC is undemanding, but surprisingly fun. All you do is swallow things with a hole in the ground. I think the physics play a big part in making it good. Everything moves with the same weightlessness, meaning everything is easy to swallow. As long as the hole is big enough, things will fall in no problem. Every single time I found myself getting almost frustrated, sure that something would get stuck or glitch out, it never did.
The levels are all the ideal length. I replayed the game after I mastered it, just for fun, and whenever I felt like I would dread redoing a part, I always ended up enjoying it. It makes for a really smooth experience.
There are a few nice puzzles, too! They're perfectly balanced to me - not extremely difficult, but still JUST complex enough to be fun. And there's no precision required for the ones where you have to aim. It'll probably take you two or three tries at most.
The gameplay here adds up to something that never sacrifices pacing or calmness to mechanics. It was never supposed to be extremely challenging; it's a satisfying and 'restful' game that gives you a break from all of the challenging ones. It's nothing revolutionary by any means, but it doesn't have to be. It controls well, and is rewarding and brief. It does exactly what it intends to do.
Overall, 3.5/5.

Worldbuilding:
The world is so cute and colorful. Each level is memorable in its own way. They're all crafted with such detail - which makes sense, since the focus of the gameplay is on the items themselves. The visuals, music, and environments create really great settings.
As for "lore", since it's only a few hours long, there's not really time to expand upon that sort of thing in meaningful ways. But that's fine, because the cast and plot add plenty. It gives this limited world a sense of life and fullness. It's really impressive for something this short.
Overall, 4/5.

Overall game score: 4/5. Donut County is such a wonderful little indie gem. It has beautiful visuals and environments. It has a downright amazing soundtrack. It has relaxing and uncomplicated gameplay. It has all of that, while also telling a story with pretty 'big' themes. It may not be the most deep or emotionally investing one, but it's one that impressed me. It all adds up to a very calming, cute, and happy experience that I really loved. This is a perfect thing to play in between more heavy games. I highly recommend it. I want a 10 hour version of this, is amazingly charming

What a chill game. Light, airy, clever, and dare I say....cute. Donut County, clocking in at just a couple hours to complete, is a light afternoon snack that's just delightful. The gameplay is intuitive, writing is sharp and witty, and the premise is just inventive enough to make it worth your time. If it was any longer, it would wear out its welcome, but it understands what it is and doesn't overstep its boundaries.