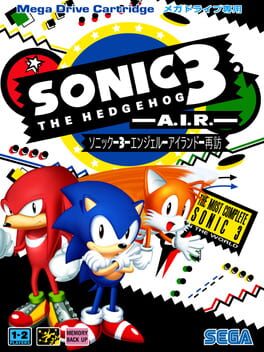 Sonic 3 - Angel Island Revisited (Sonic 3 A.I.R.) is an unofficial port of Sonic 3 & Knuckles for Windows PCs.
It very closely resembles the original game, but adds features you would only expect from a modern fan game engine - including full support for 16:9 widescreen display, alpha transparency effects, and smooth 360° rotation. I played this alot back then, especially Sonic The Hedgehog 3. I recently I played it again due to some videos recommended to me and some piqued my curiosity as Sonic The Hedgehog 3 may never be re-released in future and all the interesting facts they show.

Playing Sonic 3 AIR is really the definitive way of playing Sonic 3 and Knuckles no doubt, with features that you can imagine if Christian Whitehead devs would do a Sonic the Hedgehog 3 port of the game. Widescreen and all the possible cut content being intergrated into this port of the game

Sonic the Hedgehog 3 really takes me back, seemless gameplay design of the Sonic series, the easiest entry in the series, sounds and music that is memorable and pleasing to the ears. interesting mechanics that kept young me coming back for more even though I will probably be stuck in the Carnival Zone not knowing that Up and Down direction is all takes to progress in the game back then

To this day, I have shunned the series from playing any Sonic games until recently due to the notoriety of the Sonic fanbase. Sonic 3 the game that I love and I shut it out from my life for years until recently. I don't have any fond memories about Sonic and Knuckles since I only got to borrow it for like 2 weeks I think back then but it's a nice experience to finally play both games finally

After playing S3 A.I.R, I can declare that this is easily the definitive version of Sonic 3 & Knuckles and I highly recommend that you check it out if you have already played S3&K before and are looking to revisit it, or if you like platformers but haven't played it yet. It takes an already great game and fixes some minor issues that I had with the original release, as well as also adding in new features which increases its replayability.

The improvements that I think are worth noting are:
•The added widescreen
•The option to have remastered music with cleaner samples and instrumentation
•The drop dash from Mania which can be unlocked when getting all of the super emeralds
•Minor collision detection issues being less prevelent than the original release
•Having the option to change the music to standalone S3 which I honestly prefer (It goes unused in S3&K unfortunately)
•A wide variety of customisational gameplay options (Although not as diverse as S3 Complete, there is still a lot here)
•And added mod support.

Being in widescreen at 60fps takes the inhibitor rings off of a kinda flawed but still very fun classic. Great remaster of a fun game. Great level design, outstanding audio-visual presentation, a cute little story and wonderful controls. The insta-shield is a great addition to the series, too - adds a whole new layer of skill. I think the bosses are a bit of a mixed bag, most of them being unmemorable or just plain bad - and the Knuckles half of Sonic 3 and Knuckles just isn't as good as Sonic 3's half. However, this game is infectiously joyful, through the good and the bad. I really liked it.

To begin: Angel Island Revisited is a fantastic remaster, with quality-of-life changes and improvements that I can never imagine playing Sonic 3 without ever again. From the subtle visual improvements, sheer customizability, remastered audio, the Drop Dash! - Sonic 3 AIR is easily the definitive version of this game, and will always be, especially now that it has mod support.

But I think AIR is also the definitive version of a game that's slightly obsoleted by Mania in almost every aspect.

Take the starting Angel Island, for example: secret items like the ring and speed monitors near the start of Act 1 or the rings and invincibility under the pushable rock feel too disconnected from the flow of the level design in ways that Green Hill - both in its Sonic 1 and Mania renditions - never suffered from.

Big Ring distribution is also weighted in a way that I feel is unbalanced: Angel Island and Hydrocity have about seven in total if you look closely for them; Marble Garden and Carnival Night hand them out like candy; and starting from Ice Cap and into the rest of the game are too sparse - while Green Hill and Chemical Plant in Mania also total about seven or eight in Mania as well, the Big Rings are distributed more evenly across the game and placed in less obtuse ways that I found myself still finding Big Rings all the way into Metallic Madness.

Special Stages and Bonus Stages are also unquestionably better in Mania in my opinion: while I think the Special Stages need no explanation, I've found the three bonus stages of Sonic 3 too pace-breaking, especially considering that two of them let players potentially get any shield, and the other has the potential to draw rings from the player instead.
Maybe this is my bias towards pinball, but I enjoy how Trap Tower is paced, letting players just play the crane game once and leave if they choose, or letting them stay literally as long as they want in a minigame that's amazing in its own right.

The one thing I might say Sonic 3 still has over Mania is its sense of storytelling and narrative consistency... but it's not enough to tip the scales over for me when Mania has much more expressive animation, much more consistent level design; as well as better setpieces and moments like the Heavy Magician fight, Eggman's battles involving gachapon and Puyo of all things, and the entirety of the impossible-to-dislike Studiopolis Zone.

It stands in stark contrast to my actual favorite Genesis-era Sonic game: Sonic CD. Sure, it might be a bit janky compared to Sonic 3, and its mechanics and level design may not be for everyone, but it sets out to accomplish things that no other game in the series even attempted ever again - even Mania only implements these things on a purely cosmetic level, its two CD levels being almost completely reconstructed using the level gimmicks as a baseline.

I think Sonic 3 is still a very good game, all things considered - but it's a game I'd much rather replay Mania than revisit. Angel Island Revisited at least brings it up to the same level of polish that it could be up to a matter of personal preference...

But Mania has captured my heart in a way I think Sonic 3 never has in any form.