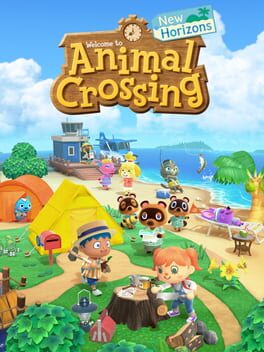 Escape to a deserted island and create your own paradise as you explore, create, and customize in the Animal Crossing: New Horizons game. Your island getaway has a wealth of natural resources that can be used to craft everything from tools to creature comforts. You can hunt down insects at the crack of dawn, decorate your paradise throughout the day, or enjoy sunset on the beach while fishing in the ocean. The time of day and season match real life, so each day on your island is a chance to check in and find new surprises all year round.

I know a lot of the "new" content is from New Leaf but as a newcomer this is a wonderful game. only problem is lack of multiple islands on a console It's still Animal Crossing, so the gameplay loop remains rewarding and relaxing by design. If you want visible evidence of how much effort you've put into a game, this franchise will always give you that. You also have more control over the look of your island than any town you did in previous entries. The freedom of personalization is arguably too much, at least by the time you obtain a landscaping permit.

With that being said, Nintendo has missed a good opportunity to craft the ultimate Animal Crossing experience. They relied too much on the ability to update the game through online connection with DLC (albeit free). I was already bored of the game by the time even the first of those began rolling out. The multiplayer experience felt severely limited based on what I had anticipated the game having (we can cut down friends' trees but not exchange items through yard sales in person?), and to top it all off, the neighbor characters take a very upsetting backseat to the adventure. The dialogue is far more redundant than it was in 2002 and 2005, and I almost never want to talk to anyone. It's harder to think of them as sentient, they're very much NPCs now. I recall playing games with characters in Wild World, and I've not had one such experience with anyone in New Horizons. There's plenty to do, but it's a lonely game. I love animal crossing, I really genuinely do. So it hurts a lot to say that this is by far the most disappointing game experience of my entire life. Animal Crossing New Horizons is an empty, soulless husk of a game that is masquerading as Animal Crossing.

Problem 1) It's way too slow. Animal Crossing is not a fast paced game by any means, in fact the entire point is that eventually you run out of things to do for the day because it moves on a real time basis. New Horizons slows down everything you can do so that it takes way longer to do pretty much anything. It takes longer to bring people to your island, it takes longer to clear out trees, it takes longer to get out furniture, it even takes longer to go from one end of your island to the other unless you invest weeks and weeks into building bridges and stairs. Crafting takes an eternity since you can only craft one object at a time. And about crafting...

Problem 2) Durability. By far the dumbest idea New Horizons had. Crafting is a brilliant idea for Animal Crossing, but Durability and the Crafting system make it terrible. Durability means that the game interrupts you randomly whenever you're trying to do something to go make you craft a new tool. This is completely unnecessary, it adds literally nothing to the game experience except making your tasks take longer.

Problem 3) It's dull. Animal Crossing New Horizons doesn't have a city area or anything similar and starts with way less villagers, so the game itself tends to feel empty. Villagers themselves have very few voice lines so often there's no reason to really talk to them. The drastic cut in available features means that unless you want to spend hours and hours decorating every inch of your island, you're not going to have much to do. It's not even that fun to earn money in this game, thanks to the loss of Tortimer Island and Perfect Fruits.

Problem 4) Longetivity. Animal Crossing New Horizon's progression starts off extremely slowly, to the point where it takes about two weeks to unlock all of your basic tools and abilities. That's not too bad, but after this the game completely plateaus. There's no progression afterwards outside of Island decoration, which is the main reason i dropped the game.

If you want to decorate your island and make it look fancy, then by all means go wild with this game. That's easily the best part and it does this better than any other Animal Crossing game. If you want a nice little life simulation game with farming elements and sweet, humanlike neighbors, play New Leaf or Stardew Valley. Don't bother with this game, it's effortless and bland. got pretty burnt out on this, but lockdown is probably a big reason for that. there feels like a lot of emptiness in this game compared to previous ones, and the dialogue from the characters has become bland. i'm interested to see how they'll continue updating this game in the future, but there was way too much missing upon release. I'm not sure how to feel about this game. On paper it has so many things I love but it feels hollow in a way that other Animal Crossing games didn't. I liked New Leaf more, this one feels unfinished even though it's technically bigger in scope. I hope it gets a big update soon like Welcome Amiibo in New Leaf.