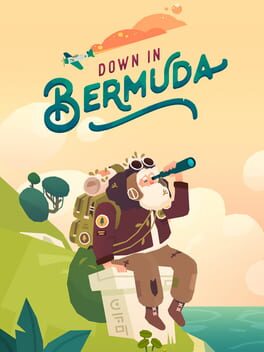 An unnatural storm leaves an adventurous aviator stranded for decades within the infamous Bermuda. Overcome creatures of the deep and unravel the islands secrets in search of a way back home. Down in Bermuda is a puzzle game where you manipulate the camera and environment to guide a stranded pilot through strange worlds back home.

Each area has you completing a series of tasks including finding a certain amount of hidden "star pieces: throughout the world and solving puzzles in order to complete certain tasks for residents and combat monsters.

Each level also contains additional collectibles including a map to help you find the star pieces, polaroids that flesh out the story, keys that can unlock areas throughout the various levels and hidden "artifacts" that you must tally up to 100% the game.

Many of the puzzles involve rotating the camera and moving the cursor around to manipulate the perspective and this works best on the macro scale of finding the collectibles but doesn't really ever have a significant impact on the smaller individual puzzles.

The smaller puzzles largely involve identifying and matching some kind of pattern found in the world to activate some device and/or how different mechanisms interact.

The game doesn't necessarily do a fantastic job of tutorializing these themes and some puzzles don't do enough to surface what the end goal is supposed to be but nothing is so frustrating that some trial and error can't get you through it.

Ultimately the way each world is designed leads to a snowball effect where each bit of progress you make winds up making the next step easier and the moments from the climax to the end of a level can feel fantastic.

There IS a story here but it's very sparse, not particularly original and the game doesn't really call too much attention to it.

Tl;dr: Down in Bermuda is a nice puzzler that's fun to sit down on and work on in chunks but doesn't do anything that necessarily sets itself apart.