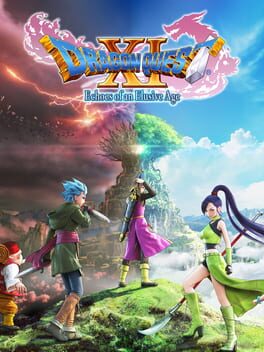 Dragon Quest XI continues the gameplay of previous games in the series, in which players explore worlds and fight against various monsters, including the ability to explore high areas. The Nintendo 3DS version features a different style than the PlayStation 4 version, showcasing 3D graphics on the top screen and 16-bit styled sprites on the bottom screen. Before entering battle, players can also toggle between the 3D and 2D graphical styles. The game features the series' traditional turn-based battle system. My fav rpg of all time

Not bad by any stretch of the imagination, but, man, this series used to challenge the boundaries of the medium with multi-perspective, multi-generational stories with innovative systems that changed the landscape of the industry. And now it just sort of...wallows in itself, rolling around in the muck of its past glories and sniffing its own farts.

Again, it isn't bad. It looks wonderful, it's very charming, and the dialogue is witty. It's a nice time. And if this was 20 or 30 hours, that'd be just fine. But it isn't. It's 80, 90, even 100 hours long. For a game that demands that much time investment, I want it to do something, to say something, and Dragon Quest XI just...doesn't.

Not only is the battle system too simplistic and shallow for a tale of this length, but the story itself takes a massive nosedive in the final act, chickening out of almost every theme it touches on, reversing character arcs and plot points, all for the sake of more Fanservice. Because Dragon Quest doesn't care about anything anymore, except itself.

Oh, and the soundtrack fucking sucks. Sugiyama isn't even good at his job, Square, why are you keeping this decrepit fascist around? ive tried to finish this game so many times

I asked someone when it got better than the town you get Sylvando in, and they told me it didn't really get better than that. I dropped it after the arena. Everything is just too overtly simplistic for me. That could have been ignored if the world was interesting at all, but that's one of the weaker aspects.