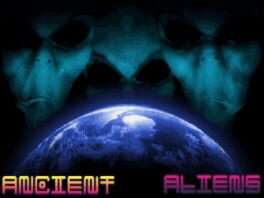 Ancient Aliens is a 32-level megawad for Boom compatible source ports, created by Paul DeBruyne (skillsaw). It is a parody of alien conspiracy theories, particularly those from the TV show of the same name. The WAD features a large range of custom textures and a new palette allowing for radically different visual styles to what is usually seen in PWADs. Also featured are several maps by guest level designers, mostly found in the third and final episode. The entirety of the soundtrack was composed by Stuart Rynn (stewboy), though several tracks were re-used from previous WADs.

skillsaw can't fool me. Ancient Aliens (the doom wad) isn't a parody of Ancient Aliens (the history channel show), but is actually a complimentary vibe piece to the oft-forgotten VICE TV show Action Bronson Watches Ancient Aliens. Anyone who has watched the somehow-still-running History channel show can tell you how surprisingly boring it is. The stuffy safe-for-8th-grade documentary style is a bad juxtaposition to the literal head-empty premise of extraterrestrials being behind some of the world's greatest wonders. What the show is good for, as both Action Bronson and skillsaw have figured out, is serving as background-noise and aesthetic inspiration for a smoke session. "Damn, you're telling me E.T. built this bitch?" is a lot more engaging when you're already kinda tweaking.

So it's only fitting then that the first level in this parody would have Doomguy walk up to a vaguely ancient temple-esque entrance, pick up a pipe of peyote, smoke it, and then be teleported by spirit wolves to incoming Cyberdemon rockets. From here till the finale, skillsaw never lets up on the smoked-out loced-out buffoonery, with every level he designs offering some twisted gimmick or bizarre architecture. MAP16, "Leave Your Sol Behind", centers around an ascending light bridge that leads inside a literal spaceship, which bolts you to some delightfully cliche lava and ice worlds, on some Super Mario Galaxy shit. MAP18, "Illuminati Revealed" is a chaotic slaughter map with a giant pyramid broadcasting a spinning Illuminati icon, with the spinning Illuminati icon gradually clouded out by a swarm of endless Cacodemons. MAP 28 "Floating Arena" is an aptly named island that will have you circle strafing on the literal boundaries of the level to corral the brutal crowding at the start of the level. The total irreverence and creativity shown by skillsaw here posterizes the TV show way harder than any academic counterargument--who gives a shit about the conspiratorial implications of antediluvian visitors when you have mood pieces like MAP24's "Culture Shock"? If extraterrestials inadvertly inspires stuff like this, they should come around more often.

If the map design of skillsaw went unhinged, it's somewhat surprising that skillsaw's gameplay design is more subdued. Unlike Valiant, skillsaw isn't interested in changing any major parts of the DOOM formula--there are only two new enemies, one grounded and one vertical, and they are both fragile glass-cannons who require similar prioritization. The somewhat-classical mechanics are spruced up with a smorgasbord of encounter design--Tyson, sniper, slaughter, trappy, and puzzle encounters all mesh together, albeit rarely in the same level. skillsaw is one of the premier 'modern' DOOM designers, so tight encounter-design is a given--the guest mappers throw in good contributions, though, save the aforementioned "Floating Arena", they lack the same 'punch' of skillsaw's maps. Perhaps skillsaw should've passed the pipe around more often!

Some very grandiose Doom mapping skill can be seen at work here. One of the things I show people to convince them that Doom modding is actually still amazing.