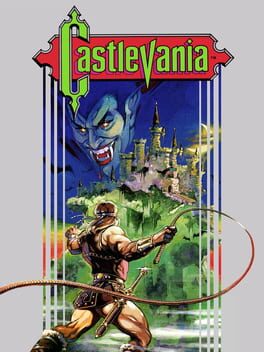 Step into the shadows of the deadliest dwelling on earth. You've arrived at Castlevania, and you're here on business: To destroy forever the Curse of the Evil Count. Unfortunately, everybody's home this evening. Bats, ghosts, every kind of creature you can imagine. You'll find 'em all over the place, if they don't find you first. Because you've got to get through six monstrous floors before you even meet up with the Master of the House. Your Magic Whip will help, and you'll probably find a weapons or two along the way. But once you make it to the tower, you can count on a Duel to the Death. The Count has waited 100 years for a rematch. one of the best action games ever made

how did kids beat this back in 1986? no amount of nintendo power is gonna help you here. outside of a rather high difficulty spike in the last third or so, castlevania stands tall in an era riddled with games that were simply hard for the sake of it. outside of it's impressive atmosphere and excellent soundtrack (both nothing new from konami) the thing that really sets castlevania apart from the crowd is it's commitment to it's core design elements. it would be easy to look at your restrictive movement and sluggish whip and call the game sloppy on the face of it, but for the most part everything is built well around this core set of mechanics. enemies are placed in fair locations, checkpoints are well placed, bosses have limited movesets, and in general it's all balanced around the weight of simon. i suppose an argument could be made that more control is always a good thing, but given the popularity of such restrictive titles as dark souls and other games like it, i don't believe it's always a necessary aspect to a good game. the worst of it is easily getting knocked into an instant death pit or being stuck on a staircase. stairs in particular present the most persistent challenge in the whole game, funny enough. all in all, i was rather impressed with this game despite some rough spots. i can't wait to see what the series will eventually blossom into from here. they made the final level with fleamen that can jump in the walls, the room with the medusa heads and axe knights, and said "yep nothing wrong here." just look up how to cheese the game or use save states for mental health Castlevania is an absolutely classic game that I am fairly split on, largely because every fun moment feels like it is equalized by a frustrating one. Simon's Castlevania jump physics are wonky, sure, but you can adjust to them pretty fast. By the end of the first group of stages I had little trouble making jumps on platforms, for example. Far more trouble comes in the active game and level design which frequently does NOT feel designed with the slow mechanics in mind, most obvious with any number of small jumping or floating enemies that become infuriating to hit in a multitiude of positions. When the game begins to absolutely spam these, such as on Stage 17, the fun factor tanks and the frustration factor sets in.

This is unfortunate because when the game is more about slow and deliberate platforming with more "fair" enemies it is pretty fun! Or even ones where you can kind of out think them, such as Holy Water on the bats in Stage 16 (although boy that stage would SUCK without power-ups), or a fair amount of the earlier levels really. It feels like the game would do better to lean into this style more given the controls, rather than the more SMB1-ish platforming you'll see in stuff like the aforementioned Stage 17. The sub weapon balance is also all over the place to the point that avoiding accidentally picking up the many more useless weapons is an important part of playstyle. Garlic is very powerful, Holy Water is busted and the cross is good, avoid stuff like the dagger.

Difficulty in general is all over the place, leading to cases of "will it be incredibly tough or will you cheese it". Death without Holy Water is ridiculously challenging, Death with Holy Water just asks you to properly time jumping and attacking to stunlock him forever. Even the final boss' second form can be cheesed this way if you have at least one projectile upgrade, making 2/3rds of the final bosses able to be turned into total jokes, although I wasn't able to do that which led to a lot more pure tough attempts. Most of the other bosses are very easy, but the Level 4 boss gave me some real fits until I won almost effortlessly for reasons I don't understand, sometimes it feels like pure luck. It takes away that sweet difficulty game "YEAH, I BEAT THAT!" high at times.

As an extremely early NES platformer it doesn't exactly have a ton of story, but for what it does do it does well. Old NES games are often about working around the limitations of the hardware to allow the player's imagination to fill the gaps, which makes setpieces and the like more important. This is something Castlevania's an expert out! The stairway climb to Dracula is iconic to the point that soooo many Castlevania games use it and is well-done here, but there's also stuff like the intro with Simon arriving at Dracula's gates, the long vertical drop into the dungeons / catacombs, having a platform section start with just the night sky to the left and a little ledge you can walk to as if to gaze out at it, and my personal favorite: Simon's chugging walk every time you complete a section of stages, while Dracula's bat form flees.

This goes hand in hand with how well done this game's graphics and sound are for the NES. This game positively oozes aesthetic for a 1986 NES game with great spritework for the time, for example the crescent moon in the walk up to Dracula is a great look, and the entire game has a somewhat dark, gritty, gothic feel to it that makes you feel like you're playing out an old school vampire novel. The songs slap for the era with particular highlights of Vampire Killer (DOOT-DOOT-DO-DO-DO-DO), Poison Mind, Nothing to Lose and Black Knight. This game is up there with Kirby's Adventure and Super Mario Bros. 3 when it comes to graphics (though I'd definitely give it to SMB3 by a large margin) for NES graphics.

All in all, Castlevania is a game too flawed for me to feel comfortable calling good, yet with too many elements I enjoyed to call it back, giving it that coveted 5/10 "average" score. Masocore gamers will absolutely enjoy this more than most and it is a classic for anyone who enjoys that tough difficulty, people interested in Castlevania's routes or just plain good looking NES games will also enjoy checking it out if they can handle the uneven and frustrating difficulty. I'd say it's worth giving a look once, but I wouldn't exactly be jumping to come back to it.