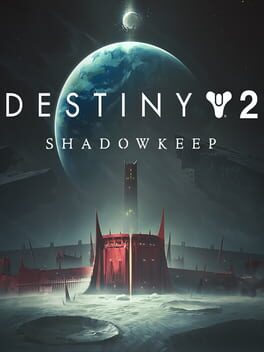 Destiny 2: Shadowkeep does not require ownership of any previous Destiny 2 expansions to purchase or play.

Something stirs on the surface of our forgotten moon – spiritual remnants of the past, haunted by the memories of their deaths. So strong is their torment that it has begun to reshape reality itself, calling forth waking nightmares that mimic foes once thought conquered by Guardians: warlords, mercenaries, prisoners, and disciples now imbued with dark power, fed by fear itself.

The strike is interesting, the final story mission was interesting, and Xenophage is a cool weapon, but the expansion felt very bare. Now that time's passed enough I feel more confident talking about this expansion. When I first played it, I dropped it about 2/3 in. I was tired, disappointed, thoroughly washed out of attempting to get into Destiny 2 in any regard. There's a lot to that, combination of feelings of Forsaken being good (but not like, that good. It's weird how venerated it gets but maybe when it's your only piece of good content that's just how it goes), surrounded by friends who were FOMO on Shadowkeep's launch culture, who could never stop talking about how awesome it is. I ended up getting it right before Beyond Light was launching, sort of trying to catch up.

The first mission was a solid tonesetter, getting a bit of my intrigue with some of the imagery and looking visually splendent. I was excited, there was a feeling that they really had found their place with Forsaken and knew what they were doing.

That was wrong. So utterly wrong. The remaining 80% of Shadowkeep is grinding, a strike, grinding, overworld boss bullshit, grinding, a final level mission and a boss. Nothing happens to the story, and pacing is at an all time low again. It reminds me strongly of Year 1 content, but worse personally in that Shadowkeep genuinely feels like it has an idea behind it, unlike those expacs. It drowns itself in familiar imagery of the series, fanservicing alongside its slew of pointless gather a bunch of dead enemies so you can unlock the path forward. So I walked away so defeated, so utterly demolished that I could trust the Destiny 2 community or the friends who tried to get me into this game. They're still my friends mind, but it was not a good feeling at all to feel genuinely gaslit about things about Shadowkeep that weren't actually there (and really, they did lie about some shit I have a grudge about).

Ultimately, over the year following I did actually end up doing the garden of salvation raid and finishing the campaign. The latter honestly wasn't worth it, but the raid was fun. It balances a lot of artistic splendor in its environments while juggling enough good encounters. It's no Last Wish in terms of mechanical difficulty or however many mechanics you're ending up balancing, but it's better telegraphed (other than really one encounter) than most of the raids and it ended up being one I rather enjoyed.

But it's not my selling point for shadowkeep, even on the deep sale it's currently at by the time of writing. I'm hoping with my heart that Bungie finds some sort of footing, or maybe in 3-4 years it has a FF14 style "you have to play this game just for this" expac. I do not think anything here implies that the life on D2's staff is utterly soulless, or that the quality of their work ethic for this game has dropped. If anything they've gotten better with their community and on top of things schedule wise as a whole, it's just that most of the content is deeply not for me and/or awful garbage.

If you do find yourself pushed into playing D2, skip this one. Forsaken is no golden king but it is certainly the best they've got right now and it's not worth putting faith into until they give genuine returns.

A literal fucking embarassment to the Destiny franchise. The worst one at that. Single worst piece of content I've ever played for any game. The year 3 seasons only made it worse. Shit game. House of Wolves all over again. A cynical nothing of an expansion.

The Black Garden is pretty though.

absolute mess of a poorly made cynical skinner box on top of one of the most fun shooting of all time and an incredibly fascinating universe/lore. the only high point of shadowkeep was probably garden of salvation, which was absolutely fantastic and one of the most fun experiences in gaming. pretty much everything else though left a sour taste in my mouth.

ive checked back in briefly for some of the seasons, and their habit of trying to string players along doing dozens and dozens of hours of basically the same exact content they have been doing for years just feels worse and worse the longer it goes on. theres also dozens of quality of life things that just seem to never be addressed.

it can just get incredibly frustrating trying to engage with this game for the amount of time the game asks you to. play it, get to the point where you can experience the raids once or twice, and bail.