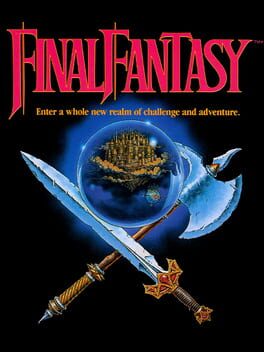 Final Fantasy, also known as Final Fantasy I in re-releases, is a role-playing game developed and published by Square Co., Ltd. for the Nintendo Entertainment System in Japan in December 1987, and the first title in Square's flagship Final Fantasy series.

The game puts players in control of four characters known as the Warriors of Light, and begins by asking the player to select the classes and names of each. The Warriors of Light can traverse the maps of dungeons and towns, which are connected by a world map, and will run into random encounters with enemies or fight bosses. You never forget your first.

Good game. Does it hold up? Not really. Is it worth playing today? Not unless you're interested in the historical value. But I have a lot of fun with it. It's grindy, but it's one of those games that lives on the grind. And it's also really short by JRPG standards. And Town is the best town theme in any game, and you can't convince me otherwise. Also, Prelude and the Final Fantasy theme. Uematsu was a god from the very start. This was the first game I played that fully sucked me in. This game and Dragon Quest 1 being my first introductions to JRPGs that weren't Mario or Pokémon might have ruined my impressions about the entire genre for the longest time.

I've played this on both the PSP and the NES versions, and neither of them are really satisfactory. The whole adventure feels pointless when there's a plot, but virtually zero storytelling; given how stat buffs and statuses are so unexplained (did trying to cast a Slow spell on the enemy even work? does Blind even do anything?), I feel like magic just devolves into spamming elemental attacks and healing, especially in the NES version where spell charges are so much more limited, and I'm starting to realize I really don't like it when RPGs are just about beating each other up indiscriminately until one side dies.

I'd say I respect the targeting system in the original, but I feel like it was a start of a decent idea that the genre and game design just wasn't ready for at the time. In getting rid of it, I think the PSP version also gets rid of the only interesting thing about Final Fantasy 1, and, that's a shame.

Also, tiles that always trigger boss encounters EVERY TIME you step on them? Who thought that was a good idea?