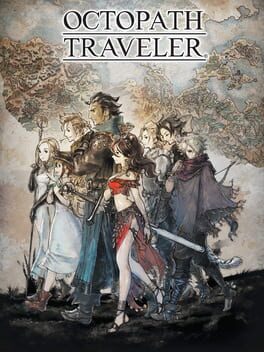 A role-playing game from the Bravely Default team is being developed exclusively for the Nintendo Switch. They have brought a new world to life through a mix of CG, pixel art, and "HD-2D" visuals. why does this every vista in this game have such a urinous tint and glaucomal depth of field??? I dont find it visually appealing at all it looks like someone tried to make the Piss Christ out of an Illusion of Gaia screenshot The soul is gone. That era is somewhere else. In its place, hollow exercises in innovating the same ideas, imitation of the text, lack of vision, and eye candy Amazing game! Loved everyone’s stories from start to finish. They were all so engaging to play and it kept me eager to see what would happen next. Also voice acting is phenomenal in this game. While I have very little nostalgia for Final Fantasy series and the traditional JRPG genre as a whole, I can only appreciate what Team Asano has been trying to do since their very first title, The 4 Heroes of Light. There have been a lot of "Modern JRPGs" since the end of PS2-era, the last days of the genre's golden age; but there has not been many "Modernized JRPGs." Many so-called Modern JRPGs feel more like a product of market research, incorporating the trends relevant to the time of release and hoping they stick. But Team Asano's games (and to a lesser extent, Persona series) really tries to modernize the genre by re-interpreting the roots.

As it was in their previous games, Octopath Traveler does not consider its turn-based nature a limitation--instead, turns and turn-orders are resources that must be carefully managed to create maximum effciency. A boss battle in Octopath Traveler ultimately comes down to minimizing the boss's number of chances to attack while maximizing your own number of chances to inflict damage. This means that when building your party, stats are not everything. Maybe you want your best dps dealer to have slow speed so you can make sure your support members can buff him up during the small time frame you have to deal exponential damage. Or maybe you might want to forego breaking enemy at the end of a round to breaking him early in the next round, earning you an extra boost point and more time for you to setup your next attack--even at the expense of taking a hit. In that sense, Octopath Traveler's best battles feel like a card game between you and the boss, where you manage the resource and time--something not many games grasp.

Team Asano's previous games, Bravely Default and its sequel, also have the similar concept, but not to this degree. When compared to Shin Megami Tensei (and Persona's) Press Turn system, it's unique in that you don't try to chain your turns, but instead try to use what you have with maximum effciency. I believe this encourages even casual players to experiment more often with the jobs and builds, and this process becomes as important and enjoyable as the combat itself.

I have very little to say about other things. Graphics are just gorgeous, beautiful and I really hope they make more games in this style, either by Team Asano themselves (Project Triangle Strategy looks great) or by other devs (Eiyuden Chronicles). The main story, which is actually basically 8 individual "companion connections" is the big point of criticism here. It's not that the lack of overarching narrative is inherently bad, but the lack of interaction between the 8 characters in each of their story certainly raises eyebrows. All these party interactions are relegated to the party chat that is completely detached to the story (like the ones in Tales of series and Team Asano's own Bravely Default), but they are simply not enough when they are the only points of intereaction between your main characters. They definitely had the potential here, especially with how all the 8 stories do end up connecting to each other. It's a missed opportunity, especially when I quite liked the more small-scale personal stories taking the forefront instead of the usual cliches of deicides or some other ridiculous concepts that are the staples of the genre.