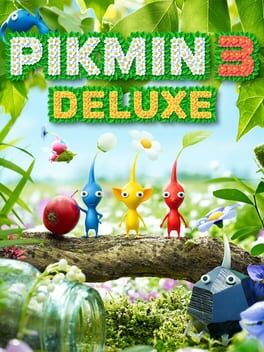 Prepare yourselves, brave explorers! Set-off for the lush planet PNF-404 when Pikmin 3 Deluxe lands on October 30! This new version for Nintendo Switch features multiple difficulty modes, new side-story missions featuring Olimar and Louie, and all the DLC from the original release.

Not as great as 2, but I adored it. The extra mechanics of gathering tile, plus the use of the flying Pikmin made it a more than welcome addition to the Pikmin series. I did appreciating having Olimar and Louie be part of the story, instead of them being completely removed. Plus having the Plasm Wraith stalk you and hunt you down during the final boss made for an incredibly tense and scary experience. What I did find odd is that this game has achievements. Is that something Nintendo doesn't normally do with their games? It's got me curious.

I hope we keep these little prey at the top of the food chain once again. And considering this is the best selling Pikmin game, I hope that that future isn't too far away.

How do they juice an avocado and a banana It's quirky, I love it.
I skipped second part and thought Olimar's the best character, but the addition of the other characters is well made and everyone has their fun moments.
Only thing I miss from Pikmin 1 and 2 is the ability to move the pikmin by joystick. It was so fun to move them around like that.
Story could be a bit longer, but the challenging modes are there and I want to play hardest difficulty again.

Very Charming. Great visuals. Great Gameplay loop. Meant to be replayed over and over again. I haven't done that yet. I just beat the game and stopped, but I've been meaning to go back.

It was alright, it wasn't great, and I don't think it's better than either of the previous games really, at least as far as the main campaign goes.

Who knows, maybe the Side Stories will change my mind. This game just doesn't do anything particularly new or interesting in comparison to the other two. There were hardly any interesting new enemies and it actually omits a lot of the new enemies that were introduced in Pikmin 2. There were some cool new bosses, but that's about it. It's significantly easier in comparison to the previous games too.

It wasn't at all bad, and I enjoyed my time with it, but it wasn't anything that particularly impressed me either. Just overall feeling rather underwhelmed.

I'll update with my feelings of the side stories at a later date.