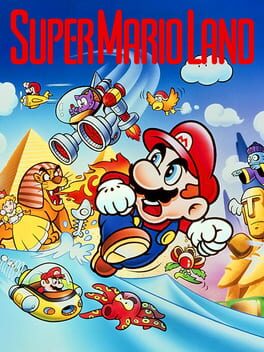 Super Mario Land is the first Mario's outing on the Game Boy. It is a side-scrolling platformer much in the vein of the previous Super Mario Bros. This time, Mario must save Princess Daisy, rather than Princess Toadstool, from her kidnapper Tatanga, a mysterious spaceman. The game follows largely the same formula of its aforementioned predecessor, with Mario defeating enemies by jumping on them and collecting coins and power ups by hitting floating blocks, with each world leading up to a boss fight which is defeated using by collapsing the floor. A unique feature of this instalment is two scrolling shoot-'em-up levels, the first of which Mario pilots a submarine, and the second an aeroplane. The physics kinda suck, but the soundtrack slaps and it doesn't overstay its welcome, so it's a good time I actually had a pretty hard time with this one. Your Mario muscle memory built up over a lifetime really works against you here, and you'll find yourself overcorrecting your stops and sliding off platforms backwards, landing right next to enemies instead of on their heads (sprites are WAY bigger than the actual hitboxes), and generally trying to play this faster than it's really built for.

But I dunno, it's still a good time and an incredibly fleshed out experience for a Game Boy launch title. I've always heard about this game being such a classic, but whenever I tried to get into it, it was just sorta off putting. Not in the sense that the levels and such all had bizarre themes, but like why is Mario riding an airplane? I'm honestly shocked that a number of levels, including the final boss just ends up being a shmup, and while I was able to beat this game now, I'm honestly surprised how far I got as a kid. This game isn't hard hard, but it really is no walk in the park either. Compared to the original Super Mario Bros, I'd certainly say it was harder, but that may be due to other things like screen issues and controls.
There isn't much doubt that this game was a classic back in it's day, and the idea of a portable Mario game was enough to sell itself to many people, but nowadays it's just kinda lackluster. Everything about this game is rather off, and because of that, many of the enemies and level design end up being rather forgettable compared to their iconic console counter parts. If you really want to explore Mario's first outing on a handheld, I do feel this game holds up enough for a look through, but it's not something I recommend people play.