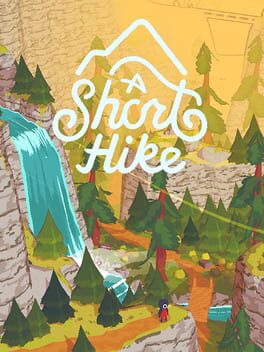 Hike, climb, and soar through the peaceful mountainside landscapes of Hawk Peak Provincial Park as you make your way to the summit.

It's...good, but feels unfocused. I mean, there's a clear goal of course but it's so swamped in a bunch of unnecessary side quests and collectibles. Also kinda feels like it's taking a bit from Celeste? Just a bit? Not much, but it's noticeable to me, idk.

i won’t pretend like i didn’t actually like this (a lot at some points!) but it really is the most nintendo fanboy thing just about ever, idk the whole thing feels swathed in like… desperate desire to be loved as if they were self-consciously trying to create a nintendo ds ead-developed cult hit from 2009 that never was. also this and anodyne 2 are reaching for reactor critical levels of enervating tweeness (im ngl when you start anodyne 2 and its like “these are your mommies!” it makes me want to smash my face directly thru the nearest drywall)

i really do feel without reservation that this game has too much collectable shit on every screen lol, feathers, shells, coins, treasure chests (which sometimes contain coins), dig spots (which sometimes contain treasure chests containing coins), LITERAL garbage scraps at one point lmfao. idk i don’t want to sound too down on it bc it does a lot of really good stuff too (that pretty much everyone has elucidated on already so) i just wish it were Better because i feel like this has potential to be something genuinely dear to my heart.

i thought maybe it was foreshadowing the bird parents were getting divorced, every character is like "wow go for a short hike and get your mind off things girl". the reveal of What’s On Claire’s Mind is sure to make your EYES roll SO HARD they UNSCREW OUT OF THEIR SOCKETS COMPLETELY, idk it just totally grates on me how this is foreshadowed at the very start of the game (like, on the title screen itself), it all feels extremely screenwriting 101 (nb i am someone who has never taken a screenwriting class or been in a college classroom ever lol)

idk the ending is beautiful, you can go fast in a go fast boat, some of the dialogue actually makes me lol irl a little bit, gliding around does feel great, to be clear i don’t think it’s a bad thing that this has breath of the wild climbing considering how that is kind of the best climbing system (it’s ~a short hike~ from shadow of the colossus to botw to this imo)

maybe i'm being too mean about it, i just think i'm holding it to the exact same standards that i would hold any other videogame to

This game is adorable. Its like a hot cup of soup on a winters night. Nothing about this game isn't charming, and sweet, and warm, and fresh. it's exactly what we need right now It is surprisingly nice A classic example of a game not reaching its full potential. The concept is unbelievably great. It has a clear goal: climbing a mountain in order to get cell phone reception. It has an engaging way to accomplish said goal: having to balance unique, not-quite-3D platforming with collecting upgrades through various means like exploration and interacting with other hikers. What's most impressive is how self-contained it all is- never for a second does anything feel thematically out of place, nor does it feel like any aspect was only put in to make the game "work better" as a game. It feels like an artistic vision come to life with no compromise. However, what the concept hinges on in order to be successful is unfortunately what the game fails to accomplish. The balancing act that the player has to perform should mean that it's not possible to progress in either of the two fields- climbing the mountain and collecting upgrades- without progressing in both of them, but this just isn't the case. There's not really any struggle in climbing the mountain, meaning that I was able to beat the game while picking up only a few feathers before going back down to collect everything else. The lack of challenges to overcome, and because of that the lack of multitasking the player is forced to do, ultimately make the game An Unsatisfying Hike, and the cheesy, predictable ending and Night in the Woods-esque dialogue certainly don't help.