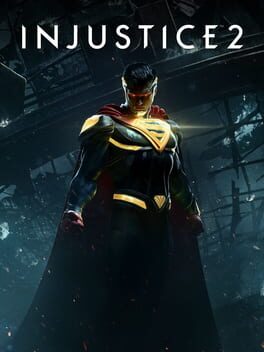 Fun roster, including all-time greats like Hellboy and the TMNT, and still some of the best graphics insofar as fidelity is concerned in the genre.

However, extremely hampered by being a NRS game. Maybe someday they'll learn how to make fighting games feel good!

Aside from a few continuity problems I have with this game, I do like how the story mode just ups the stakes in a feasible way. It's really nice to see how they build on the first game, and still set up fights with choices you make. Again it's a bit formulic, but it fits well enough. The fighting has also been retooled a bit and feels less stiff compared to the first Injustice. I do wish there was some fun for the DLC characters to do something in the story or to simply have more characters in the story as a whole, but at least all the guest characters are fun to play with as well. I can't say the same for the loot box system they put in the game however, and it really makes me confused why such a thing exists, as it's largely for two modes that don't really do anything. Still it has a great trial mode, and a better tutorial for more advance techs then most fighting games. If you want to get into fighting games, Injustice 2 would be a good start.

Disappointing and not as strong as the original

Such a dark and brutal illustration of the DC Universe will always be worth picking up. I've never really played any MK games, but I much prefer the combat style here (albeit, the differences are quite minute).
I remember there being way too much dialogue in the campaign though, and definitely not enough actual action.

Story is kinda eh in some parts but it works. Gameplay is good but they need to balance projectiles

Loot system is terrible, but the cosmetic customization is neat and the characters feel really different from each other in a fun way. It's not an elite 2D fighter, but it's fun and an easy game to recommend for people who like DC

I'm still trash at fighting games, but this was a decent experience.

Good story, but not better than the first game's; good roster, but it misses something; more balanced but f--k gears with stats.

God, I suck at arcade fighters. I just wanted a game where I could play as Wonder Woman.

As part of my prep for Netherrealms's next game which I believe could be Injustice 3, I decided to check out Injustice 1 and 2. I've already reviewed IJ1, now is the time for 2.

Overall, i think this game is a much better game than the first one, because obviously there are things that have been improved on like gameplay, story, character designs which I will get into.

The story was much improved and less confusing, it had a clear goal from the beginning and I thought it had some cool moments of heart with some characters but they weren't too great.

The gameplay was also improved and a lot more fun to play, I liked some of the special moves, especially Batman's move and Superman's as well, the gear system was ok but I've not really played fights against CPU's much so I'm probably touching the surface when it comes to some of the gear.

Character designs were cool as well, I loved some of the suit designs in this game and the graphics helped them looked nice, especially Batman's design too.

The music could've been way better, I wish there was a main theme across both games that could be recognised, something like Mortal Kombat.

OVERALL: A big improvement from Injustice: Gods Among Us, better story, better characters and villains, even a better roster. FINAL SCORE is 8/10.

I enjoyed this game so much. The story mode kept me interested the entire way through. The character roster is fantastic as well. the inclusion of Sub-Zero, Raiden, Hellboy, and TMNT made it even better.

Batman and Superman are such dorks in this game, the "serious" tone fell flat and I ended seeing the story as cheese with more cheese, still enjoyable though.

Combat is fun and simple. Kinda clunky in places. Plot isn't bad, not into comic book characters too much, the darker versions of characters is kinda interesting.

A much better competitive fighter then Injustice 1 with a great story mode as well.

Prefer the fight mechanics in the MK series, but the characters and story in this were great, just the right length, had a blast! Played via xbox gamepass on pc, Did have an issue with cutscenes going out of sync with the audio.

It's alright. I'm not that big of a DC fan so I didn't that much enjoyment from it. I didn't play the first Injustice so I didn't understand some of the stuff they were referencing (which is 100% my fault). To be honest, I only bought this game to play as Hellboy and TMNT and I still haven't bought them and probably won't. If you like DC and liked the first Injustice game then you'll probably like this game.

jesus fuck why did i play this

I forgot how good this game is (though the loot system remains hot garbage).

Better than the first for sure. Better combat and abilities. The story and writing of the character is much better too but it does suffer from some of the issues the first one had. It's the best Injustice game anyway and I hope we get a third one that's great