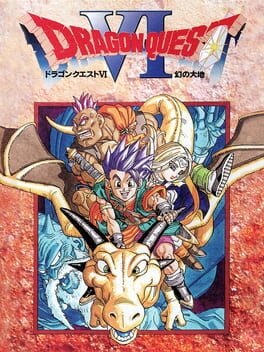 Dragon Quest VI is the sixth installment in the Dragon Quest series. It is the penultimate title for the Nintendo Super Famicom as well as the last game in the Zenithia trilogy, and the first game in the series to be developed by Heartbeat, rather than Chunsoft.

Like every other Dragon Quest game, the setting in Dragon Quest VI is very medieval, complete with castles, knights, and magic. The main world is divided into the Lower World and the Upper World, each with a separate but similar map. To get from one world to the other, the party uses special warps (such as in wells) or by ascending/descending colossal stairs on the world map.

Likeable enough, fun world idea, but kind of just loses its pacing about 1/3 through and bored me. The pulpy/campy fantasy story seemed promising, but... the game's just so long.
There's not much interesting tension to the dungeons, etc. I mean they feel different and you have to go through multiple times but it gets repetitive. An interview said the game 'really starts' at Dharma temple but come on I'm like 10-15 hours in and I'm not there yet, I've played plenty of RPGs that Really Start in 5 minutes. I'm still putting the game on 8x and holding attack to win every random battle. If I had Nothing Else to play I would probably stick it out but I think I'm Good.
Music is great but there's still the problem where Sugiyama doesn't write enough songs so every dungeon and town feels the same despite the efforts of the artists/writing team.

I don't hate it, but it's still not very good. The biggest complaint I have about the game is the job change system itself. It averages out and dilutes the differences in character personality/performance.
Hassan is a very strong and good character who is still relevant today.